According to information compiled by Minghui.org, 4,892 people were arrested in China in the first half of 2016 under the communist regime’s persecution of Falun Gong, a spiritual discipline based on the principles of Truthfulness-Compassion-Forbearance.

Among these practitioners, 682 (13.9%) were arrested for filing criminal complaints against former Communist Party leader Jiang Zemin, who ordered the persecution of Falun Gong in 1999. Others were reported to or caught by police for distributing information about the persecution, or were monitored by the police. There were also 54 non-practitioners arrested while seeking the release of their practitioner family members.

To date, 1,882 (38.5%) have been released. The remaining practitioners are held in various places, including detention centers, police stations, and brainwashing centers. Another 247 (5%) have been formally arrested and are facing possible indictment.

In example, Mr. Guo Jiayu, a new college graduate from the University of Science and Technology of China was denied admission to his alma mater’s graduate school in January 2016 as a result of pressure from local authorities. He appealed but was still rejected. He was arrested on June 16 and is now facing criminal charges for producing and distributing DVDs bearing information about the persecution of Falun Gong.

Practitioners All Across China Targeted 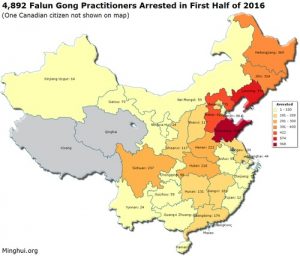 Many practitioners were brutalized during arrest and later in detention.

In addition to physical torture, such as beatings, hanging up, sleep deprivation, strangling with ropes or handcuffs, and force-feeding, there were also cases of police injecting unknown drugs into the practitioners, causing various symptoms including muscular atrophy, blurred vision, memory loss, and weight loss.

Mr. Zheng Kaiyuan, 78, a retired teacher from Hechuan District in Chongqing, was arrested on June 12 and taken to the Wuzun Brainwashing Centre by agents from the local 610 Office.

When he went on a hunger strike to protest the mistreatment, the officers drew his blood and injected some unknown drugs around his liver and spleen. He soon experienced muscular atrophy and extremely long-lasting pain in his entire body. He is now bedridden, extremely thin, and restricted to a liquid diet.

Worse still, as a result of the police’s brutality, some practitioners died within days or even hours of their arrests.

In the newest confirmed death case on June 2, Mr. Wang Jigui, a doctor of traditional Chinese medicine, suddenly died five days after he was rushed to a hospital. Before that, he sounded healthy when he called his family from the prison on May 26 of this year.

While his family were viewing his body, they noticed bruises on his chest and the right side of his neck. A doctor replied that it was a result of chest compressions during resuscitation.

While arresting the practitioners, the police often confiscated their homes and took away valuable items, including cash and bank deposits. Money confiscated or extorted by the police in the first half of 2016 added up to nearly two million yuan.

In the case of practitioner couple Mr. Zhang Jingquan and Ms. Liu Jinru in Siping City, Jilin Province, the police confiscated 168,000 yuan in cash and many other valuables, such as computers, cell phones, and even a motorcycle, during their arrests on June 16, 2016.

In Jinzhou, Liaoning Province, agents from the 610 Office have extorted between 50,000 and 80,000 yuan from practitioners’ families, who fear that their relatives would be tortured in custody. Both practitioner Chen Youbin and Wang Ping’s family paid huge amounts of money in exchange for their release.