As Falun Gong practitioners all over the world continue raising awareness of the persecution, they have found more and more support. For many, their support no longer stops at giving their own signatures. This was the case last weekend in Scotland, Germany, and Australia.

Two unexpected helpers joined the practitioners in Sydney last Saturday. Jack and Kevin, two locals, passed by the practitioners’ booth in Chinatown. They had never heard of Falun Gong, and were shocked by the brutality of the persecution in China, especially the forced organ harvesting.

They felt that it was very important to help more people know about it. They asked practitioners for blank petitions and helped them to collect signatures from tourists and passersby. Many people stopped and listened to them. In one hour, they collected more than 60 signatures. 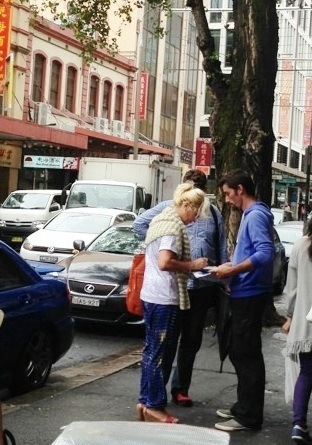 Kevin, a local, is collecting signatures for Falun Gong in Sydney 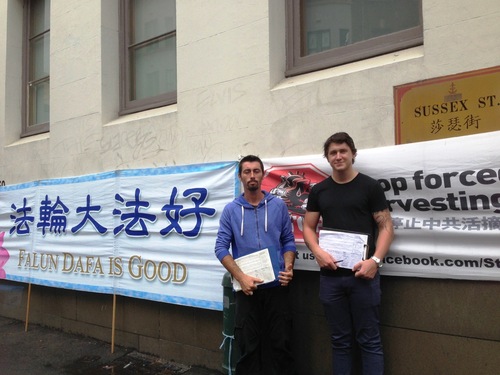 Every Saturday, practitioners in Glasgow, the second largest city in Scotland, set up a booth in the busies shopping district, collecting signatures against the persecution and the forced organ harvesting in China. 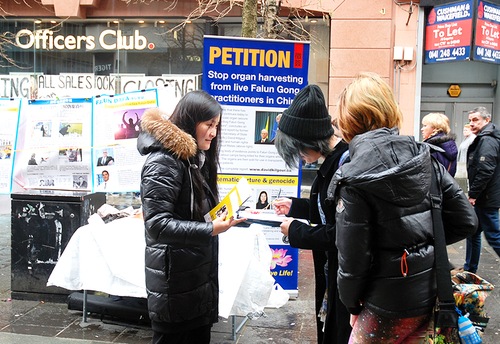 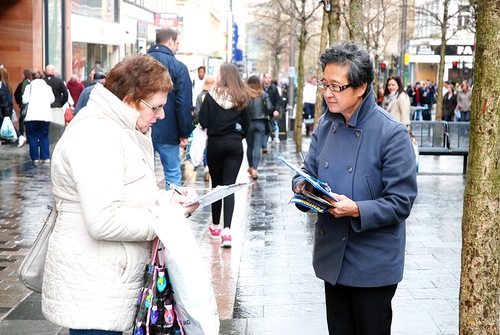 Two Chinese students told practitioners that they had learned about Falun Gong on the Internet. They were sad about what has been happening in China, and would like to tell their families and friends about what they learned. “There are still so many Chinese students who don’t know about this,” they said, “You’ve done great. Please keep it up.”

Practitioners set up banners and photos in the city center and demonstrated the exercises last Saturday. Many people stopped by their booth.

Mr. Stanko was happy to talk to the practitioners. He often thinks about the meaning of life. However he often gets troubled when he tries to discuss this issue with people around him. He wanted to know the real purpose of life. He told practitioners that they were the only group of people with whom he could really talk about this question. He felt relieved and happy.

A Muslim couple from Turkey didn’t want to accept the practitioners’ materials in the beginning, because they thought that Falun Gong was a religion. Practitioners told them the facts, and about how many people practice it in Turkey. The husband was very surprised and asked many questions. In the end, he took the materials and asked how they could help. They both signed the petition.