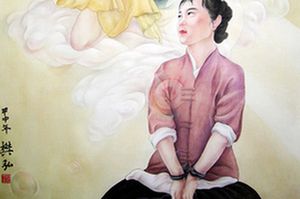 Ms. Wang Weizhen, a military doctor in Liaoning Province, was sentenced to 8 years of imprisonment for practicing Falun Gong.

After being taken to the Liaoning Women’s Prison on January 5, 2017, her health deteriorated, and she is currently held in the old and disabled division.

Prison officials have tried repeatedly to convince her to renounce her belief in exchange for a reduced term, but Ms. Wang remains determined in her faith. During family visits, she has told her family that she was innocent and would not bow to the unjustified persecution.

Ms. Wang, a colonel in the Shenyang Military Region, is responsible for both research and teaching. After beginning to practice Falun Gong in 1996, her numerous illnesses disappeared including heart disease, live problems, lumbar disc herniation, and severe anemia. She also became more open-minded and a better person.

Agents from Xiuyue Police Station arrested 68-year-old Ms. Wang at home on December 16, 2016, and sent her to the Yaojia Detention Centre. Although her blood pressure was as high as 230, the detention centre still admitted her.

Her family did not know her whereabouts until they received a phone call from Liaoning Women’s Prison. The detention centre had sent Ms. Wang to the prison on January 5, 2017, without notifying her family members.

When her family went there the next day to request a visit, prison officials denied the request, saying that they had to wait for two months for Ms. Wang’s “training and orientation.”

Liaoning Women’s Prison has been known to detain many practitioners. According to released practitioners, this two-month training period amounts to time for physical abuse and brainwashing to try to force practitioners to renounce their belief.

Ms. Wang’s blood pressure remained high, at 230, when she was admitted to the prison. Worried about her health, her family members contacted officials requesting release on medical bail. The request was denied, and one officer told the family, “The detention will continue here unless it is a terminal illness.”