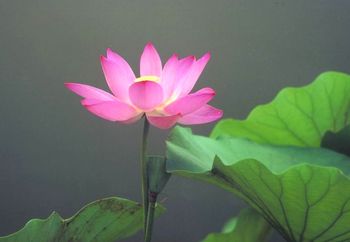 I am a 27-year-old practitioner from Latvia, and I’ve practiced Falun Dafa for six years. First of all, I would like to express my gratitude to Master Li for his benevolent guidance and unconditional care.

When I began to practice, I was determined to meditate with both legs crossed (full lotus position) and become tranquil. I was very inspired when I went to the local Fa study group and noticed that one practitioner always sat in the full lotus position to read the teachings. His back was always straight. No matter how long we read, he did not take his legs down. He inspired me and I felt that I had to meet that standard.

But this was only the beginning of my full-lotus journey. My greatest aspiration was to be able to do the full-lotus position for the entire one-hour exercise. With that in mind, I started to temper my will. And the journey, of course, hasn’t been the easiest, since for the first four years of my cultivation I’ve done it on and off – forbearing, then giving into pain…

As Master said, “I would say that the physical pains are the easiest thing to endure, as they can be overcome by biting the teeth tightly.” (Lecture Four, Zhuan Falun)

I also started to look at it that way. Initially when I did the meditation, I would subconsciously worry about when the pain would come and how long it would take. I began to fear pain.

But through studying the Fa, I understood that I must forbear, calm my heart, and do the exercise with no intention, not worrying about pain or the length of time. I must wholeheartedly do the meditation, become tranquil, and remove these attachments.

“In religious cultivation practice of the past, the Buddha School required emptiness. One should not think about anything and enter the door of emptiness. The Tao School taught nothingness, as there is nothing. One should not want anything, and neither should one pursue anything. A practitioner believes he should only focus on practicing, without paying attention to obtaining gong. In cultivation and practice one should be in a state free of intention.” (Lecture Two, Zhuan Falun)

I recited this paragraph each time before I began meditating, and it helped clear my thoughts.

Two years ago I decided that I would do the sitting meditation every day for one hour, no matter how painful it became. After the first week, I decided to set a goal to do it for 30 days, then 60 days, and then 100 days up until one year. At first I could do it for ten days, but then I skipped some days. I decided to meditate for one hour and not allow anything to interfere.

Every time I sat down to meditate, I did it for an entire hour. Of course, it wasn’t easy, because my legs started to hurt very badly at around 40 minutes. In the past, this was my biggest failing point. This time, I told myself that I would not put my legs down no matter what! When the pain came, I learned to let it go and not think about it.

For the first 90 days, the pain was extreme nearly every time I meditated! I wrote down my entire journey in my diary, where I also wrote down my understandings, poems, and experiences.

During those days I developed strong righteous thoughts that I would forbear no matter what. Because I was able to let go of the attachment to pain, no pain could interfere with my main consciousness.

For example, when the pain came and was extreme, at first, I would move around, twist my body, and so on, but I would not take my legs down. I said to myself, “This pain is nothing, my will is stronger than diamond, I’m purifying my body and transforming my karma. No difficulties can break my will. I can forbear anything.” Some days when the pain was extreme, I also recited Master’s Fa and many of Master’s poems and I would not give in to pain:

“…”When it’s difficult to endure, you can endure it. When it’s impossible to do, you can do it.”” (Lecture Nine, Zhuan Falun)

In those initial days I learned not to care about the pain and to relax my body. But I was still moving around by the end of the meditation. I realised that I could not keep twisting around like that. I had to forbear without moving. “How does a great Enlightened One endure?” I asked myself. Of course, I knew – with confidence and poise.

I said to myself with strong righteous thoughts, “I can forbear and not move.” I would remind myself of that when the pain became extreme at around 40 minutes. I learned to completely relax my body. Staying still, not moving, and not giving in to the pain was very rewarding, as I experienced strong energy circulation and the cleansing of my body.

As I continued to meditate, I was able to quickly become tranquil. There were many times when my state of ding was so deep that no thought occurred, but I was completely aware of everything.

For example, if the pain returned, I no longer worried about it and I was able to finish the exercise without moving. I gained a deeper understanding about my true self and felt that this is my true self—the one who decides to think or not to think! And when I found my true self, I was completely able to take control of myself and my thoughts, especially in meditation. I didn’t have any thoughts, just pure calm and bliss. At that point, I learned to discern external thoughts and pursuits from my real self. I can now experience true calm and peace in meditation. I wrote in my diary: “These are my best times of the day, which refresh, purify, and give me clear thoughts.

I felt what Master describes in the verse to be said before the exercise:

I understood that it is my true self that decides when to move or to become still, all with ease. Not my external thoughts, pain, or karma!

There were many times when my state of ding was tested. Since I love to do the exercises outdoors, I frequently did them on my own in a park, after or before work or on weekends.

One time while I was meditating, a group of young people came and put on very loud music. I didn’t pay any attention to it, I just stayed in deep ding. After a moment, one guy who was drunk came over and started to ask me questions and tried to disturb me. But none of these tests could interfere with my state of ding. I was completely aware of everything, but I didn’t have a single thought. I maintained a calm and compassionate heart. Of course, all these tests went away when the exercise was about to end, and I finished my meditation very peacefully. I understood that those were tests for my xinxing and state of ding.

I’ve also learned to better organise my time since I decided to do the meditation every day. When we planned large events, I would always wake up very early to do the meditation in the morning. When I was traveling, I would always wake up to meditate before everyone got up and so on. If, for some reason, I couldn’t do the mediation in the morning, I would do it at some other time during the day, even if I got home very exhausted late at night!

I had one particularly memorable experience with meditation. I’d just returned home from the 2018 European Fa Conference in Prague. Since I didn’t have time to meditate that morning, I did it when I got home after driving for over 10 hours. I don’t know if it was Master purifying my body after the conference or I had some huge karma elimination, but that day, as soon as I sat down, my legs stiffened and I was in extreme pain. Twenty minutes into the exercises, I was shaking all over from the pain. That was one of my most painful experiences. Despite that, I remained steadfast and unmoved, I endured all the pain, and I held my righteous thoughts: “My will is stronger than diamond, nothing can shake my determination. I can forbear anything.”

After the first year of doing the meditation every day, I realised on a deeper level how the exercises are only a supplementary means for reaching Consummation. They are still very important, and by no means should we slack off, but improvement in one’s heart is the most important thing.

I wrote this poem one day after I meditated:

“Deep calm, meditation, it washes all dirt away and gives true insights.

Insights into the flaws of one’s character, egoism, and selfishness.

It brings true joy, a clear field, and bright thoughts.

It is because of the improvement of one’s level.

Improvement of one’s character is the basis of cultivation.

It does not matter what the physical body can achieve,  It is because without inner elevation, without recognising and removing bad things

It’s all in vain and won’t last.

The basis of everything is Virtue, Truthfulness, Compassion, and Forbearance. Cherish this opportunity to cultivate.”

I’ve had so many experiences in these two years. After I decided to meditate every day without fail, I haven’t skipped a day. It has been 650+ days, and meditating has become natural. By doing this, I have truly tempered my will, deepened my understanding of the Fa and my true self, and experienced magical feelings. I’ve even occasionally seen different scenes.

Throughout these years, I have experienced quite a lot as I have walked my path as a Dafa disciple. There have been many ups and downs, tests that I have passed poorly, and many stumbling blocks. I still have many attachments to remove and I need to work on my xinxing.

I feel that this path is most sacred and this opportunity is hard to come by. I will try my best to do what we are supposed to do. As everything is nearing its end, I wish to encourage other practitioners to steel our wills and wholeheartedly assist Master in Fa-rectification.

Cold winds only accentuate their beauty

The interminable snowfall and rain

Are the tears of gods,

Who look longingly for the plum blossoms’ return

Never, ever get preoccupied with worldly things

For all [that you’ve gone through] since ancient times,

Was for none other than this time around.”

These are all my personal understandings. If there is anything inappropriate, please kindly point it out.