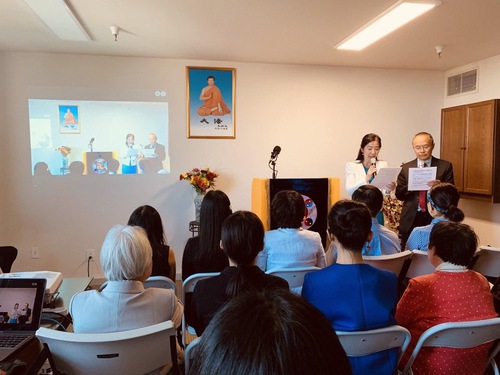 Falun Dafa practitioners working at Sound of Hope (SOH) held their first experience-sharing conference on June 6, 2020, in San Francisco, California. With two alternate venues in Los Angeles and New York as well as online attendees, practitioners from 19 countries participated in the event.

Fourteen practitioners talked about their cultivation experiences. From living by the principles of Truthfulness-Compassion-Forbearance to becoming more selfless, from eliminating jealousy to improving together as a team, they talked about how the practice of Falun Dafa benefited the team and their projects.

Ms. Li from San Diego, the chief editor for broadcasts to mainland China, has practiced Falun Dafa for 22 years. When she first became an editor, whenever she was sent articles not consistent with her style, she would make major changes or even rewrite the entire piece. She later realised that it might not be the best way to handle it.

“When other practitioners wrote the articles, they put a lot of effort into them using their capabilities,” she said. “I realised I should make minimal changes to deliver the message well while retaining the author’s tone.”

Practicing Dafa helped her become more considerate and compassionate for others, she said. “Whenever others have different opinions from mine, I shouldn’t just say no. Instead, I should listen and see why they think that way and explore going down that route. If I can remember that my role is supplementary, I can truly help other practitioners do their best. This would be the biggest success for us as a team,” she said.

Ms. Gu, a program director who works at the SOH headquarters in San Francisco, said she had learned a lot in the past 10 years. “A good program director can minimise upstream issues, while a poor program director can turn minor mistakes into major disasters,” she said. She also learned to concentrate well on her role while understanding and forgiving others for their shortcomings.

Ms. Gao lives in New York and hosts one of Sound of Hope’s video programs. When she compared her behavior to Falun Dafa’s teachings, she noticed she had a lot of attachments, such as a desire to prove herself, jealousy, complaint, and impatience.

“For example, when I watched good online videos that were similar to mine, I hardly gave them likes, as if doing so would make my videos less popular,” she said. “That was related to jealousy—if we don’t praise others when they do good work, how can we expect them to cheer for us?”

Thinking it through further, Ms. Gao realised that her response was related to jealousy, ego, and a wish to prove oneself. She memorised the section titled “Jealousy” in Zhuan Falun, the main text of Falun Dafa. “Now when I see other practitioners’ good videos on the Internet, I click ‘like’ to support them. I may not have done very well on jealousy before, but I take it seriously now,” she said.

Ms. Gao also realised that instead of merely producing programs she was interested in, she needed to know what people like to watch and what kind of information they wanted. “Our goal is not just increasing viewership or making money—those are just byproducts. The most important thing is how much people will benefit from our programs,” she added.

The first speaker at the Sound of Hope (SOH) experience-sharing conference on June 6, 2020, at the main venue in San Francisco.

Working Together as a Team

Ms. Chen from Britain is responsible for cultural programs at the European branch of SOH. During the year she’s worked in that position, she produced programs related to daily life. Because she had a shortage of staff members and had to take care of a young baby, she always felt stressed out. As the team grew, however, she became a coordinator and learned how to make the team more productive.

“As Falun Dafa practitioners, we all have the same goal, which is to help people” she said. “This requires us to remain diligence in cultivation practice, and that is a prerequisite to doing our project well.” To boost productivity, she realised mutual trust and encouragement are critical. Therefore, she often provides timely updates to the team and shares good news among team members.

“I am very happy for this opportunity to work with others and improve myself,” Ms. Chen said. “I appreciate all the help from Master Li (the founder of Falun Dafa) and fellow practitioners’ encouragement.”

Looking Within and Improving Oneself

Ms. Zhang Yuhua, former chair of the Russian Department at Nanjing Normal University, is currently an editor at SOH. She said she was impressed by others’ experiences and added, “When we really do things from our heart and want to do them well, we are able to achieve that.”

“As practitioners, when we run into conflicts with others, it’s critical for us to look within and first check how we can improve ourselves,” she said. “I learned this from Falun Dafa, and I really take it to heart.”