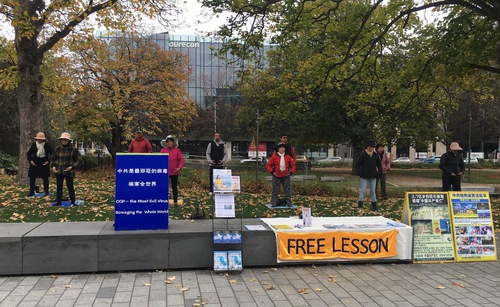 The New Zealand government relaxed its coronavirus restrictions to Level 2 on May 13, 2020, requiring social distancing and hygiene measures while stores and other public places reopen. Falun Dafa practitioners in Christchurch returned to their weekly morning practice site near the Bridge of Remembrance on Saturday, May 30.

Although it is early winter in the South Island, it was a warm day with a mild breeze. People were outdoors relaxing after being locked down for two months. As practitioners stood quietly doing the exercises to peaceful music, many people stopped to watch.

Vince, who is in his 30s, began to practice Falun Gong two weeks ago. He had taken a brochure about the spiritual discipline from the practice site six months earlier and had quickly read it and put it aside without giving it much thought.

In March, after the government imposed strict lockdown measures to stop the spread of coronavirus, Vince became very depressed as more people caught the virus and some even died. He did not know what would happen to his life or job.

He suddenly recalled the peaceful scene of practitioners doing the exercises and really wanted to be part of it.

Two weeks ago, he passed by Victoria Lake by chance and saw practitioners doing the exercises there. He walked up to them and learned the exercises. A practitioner loaned him two Falun Gong books, the introductory book Falun Gong and Zhuan Falun, the main text of the practice.

Vince felt a strong energy field while reading the books. He felt his mind become clearer and his worries disappeared. He said he intends to follow the principles of Truthfulness-Compassion-Forbearance in relationships with other people. He said his family is glad to see him embrace his new faith. 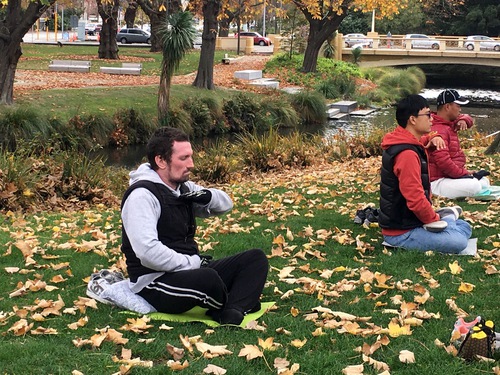 A Māori man had been driving by when he saw the practice site and pulled over to find out more about the practice. He said he was very interested in meditation. He had followed a qigong master and practiced cultivation for many years, but the master passed away all of a sudden. He felt some doubts about the cultivation way he had been practicing for so many years.

He listened as practitioners explained the basics on Falun Dafa and gladly took home information to read. 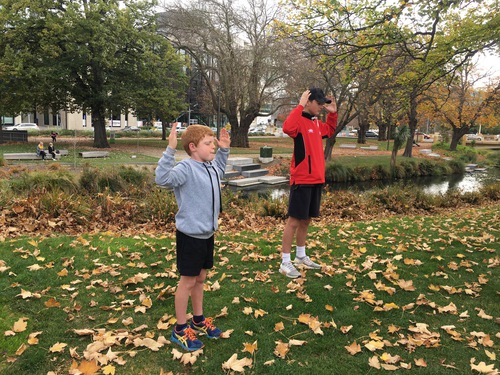 Nico and his brother joined practitioners to do the second exercise, the Falun Standing Stance.

“What Else Can I Do to Help”

A middle-aged woman came over to the practitioners and asked what “CCP” stood for on their display boards. When practitioners told her it refers to the Chinese Communist Party, she told them she knew about the CCP’s crimes against humanity such as the persecution of Falun Gong practitioners, Uyghurs, and organ harvesting. She said she had signed a petition to stop these atrocities.

A practitioner told her that the CCP’s cover-up of the Wuhan virus, which had spread from China worldwide, had caused tens of thousands of deaths and that the best way to avoid contracting the virus was to denounce the CCP. The woman nodded in agreement.

“What else can I do to help?” she asked sincerely, “Some of my friends don’t believe that organ harvesting is true. I feel very sad that this is happening. I don’t know what I can do to stop this.”

A practitioner gave her some brochures to give to her friends and said she could also share what she had learned about the persecution on social media so that more people would become aware of it. The woman agreed and asked the practitioners to take care.