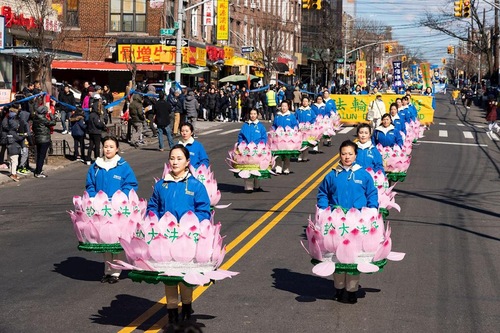 Nearly 1,000 Falun Dafa practitioners took part in a parade in Brooklyn, New York, on Sunday, March 1, to showcase the wonderful qualities of the practice to the local Chinese community.

The parade was held along Eighth Ave in Sunset Park, which is home to the third-largest Chinese community in New York City.

Falun Dafa practitioners formed a grand parade with huge signs and colorful banners. The parade started from Eighth Ave and 42nd Street and finished at Eighth Avenue and 59th Street.

Over the last two decades, Eighth Avenue has become one of Brooklyn’s busiest neighborhoods, attracting many shoppers with its many restaurants, stores, and supermarkets. The street is always bustling with shoppers and local people.

The Falun Dafa parade began at noon on Sunday and was led by the Tian Guo Marching Band, which performed several majestic tunes.

The parade’s three different sections carried three different messages to the local people: “Falun Dafa is wonderful,” “Stop the persecution in China,” and “Support the 350 million brave Chinese people who have renounced their membership in the Chinese Communist Party.”

Ms. Yi Rong, President of the Global Quit the CCP Service Center said the objective of the parade was to bring hope and blessings to the people of New York, especially now, when the world is facing the coronavirus pandemic.

“Coronavirus has spread from China all over the world. We want to tell everyone that the CCP is the most poisonous virus. The regime has been deceiving Chinese people and everyone everywhere. Stay away from the CCP and the coronavirus. You will be blessed with good fortune if you quit the CCP,” she said.

This was the second time local resident Mr. Lu had seen a Falun Dafa parade. “This is something we cannot see in China,” he said, adding that the first time he saw a Falun Dafa parade, he had felt worried because of the propaganda spread through the Communist Party’s state-run media. He said the parade gives people a strong sense of righteousness, and he agrees with the principles taught by Falun Dafa. He hopes people will follow these values.

Mr. Cai made an effort to come and watch the parade. “I agree with Truthfulness-Compassion-Forbearance. I feel wonderful following the parade. I think Falun Dafa is amazing and the teachings are great for Chinese people,” he said.

A Global Quit the CCP Service Centre volunteer said that many local Chinese people had been really happy to see the parade. One spectator said the parade had strong, positive energy. A total of 680 Chinese people quit the CCP and its affiliated organisations with the help of Falun Dafa practitioners who were on the street for the parade that day.

(Visited 4 times, 1 visits today)
Posted in World News and tagged community event, parade
← CCP Publishes New Book to Praise Itself for Its Handling of the Coronavirus EpidemicChina: Once Loyal Party Members Are Quitting the Communist Party →