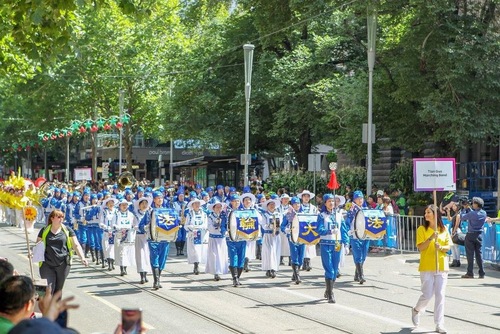 Mr. Gao Jian, supervisor of the Chinese Democratic Movement Melbourne Alliance, was very happy to see the Falun Dafa procession in the parade and especially happy to see so many Western Falun Gong practitioners.

“I think that now, with how the communist regime has treated China with the Wuhan coronavirus, is the best time to promote Falun Dafa, the best opportunity, to let people see the power of faith and see a righteous way in human world,” he said.

He said that Falun Dafa’s principles of Truthfulness-Compassion-Forbearance are very important universal principles in today’s world. “I hope that more people will study Falun Dafa and also read the Nine Commentaries on the Communist Party. Under the current circumstances, I believe that more and more mainland Chinese people will awaken,” he said.

Leader of the Opposition Party: “I was very pleased to see Falun Dafa”

MP and leader of the Liberal Party, Honorable Michael O’Brien watched the parade from theplatform with other elected officials and dignitaries.

He said he was pleased to see the different community groups celebrating Australia Day together. “It was part of making this country great, where people from all over the world came here and built a better society, and we are celebrating this today,” he said.

MP O’Brien complimented the Falun Dafa group’s beautiful float, colorful costumes and the Tian Guo Marching Band’s performance. “It is terrific. I think it is wonderful to see so many different cultures and religious groups coming out; as in Victoria, we don’t shut down religions, we support freedom of religion, freedom of religious practice, so I was very pleased to see Falun Dafa,” he said.

“The music is fantastic”

“The persecution is wrong”

Richard Blair, who works at a school in Geelong, said he couldn’t take his eyes away from the Falun Dafa group. “Out of all the performances, this was the best float for me, the best performance group. All of the parade groups are good, but this stands out.”

He explained that he signed the petition because Falun Gong practitioners put forth great effort to promote important values. “I am very passionate about what these people do. I want to support it,” he said. “I want to see that people in China can perform what they performed here today. The government of China should not send people to jail because of doing this Falun Dafa. For me, that is wrong.”