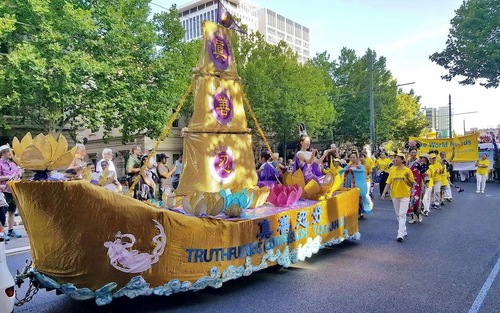 The Falun Gong group was invited to join the grand parade that has more than 4,000 participants and attracts 40,000 spectators each year. The Falun Gong procession won warm praise from the parade organisers and spectators.

Many people waved at Falun Gong practitioners in the parade and gave them thumbs-up. Many Chinese people were among the spectators, and many of them took pictures and videos of the Falun Gong procession and greeted practitioners by saying, “Happy New Year!”

The host of the parade introduced Falun Gong’s cultivation principles, Truthfulness-Compassion-Forbearance, to the crowd and told people how to find the Falun Gong exercise information online.

Mr. Peng from Sydney was very happy to see Falun Gong practitioners in the parade and took many pictures. He said he knew about the terrible persecution. “I see them in Sydney Chinatown every day. I respect their faith.”

Mrs. Zhou had come from China to Australia to visit her daughter. She admired the freedom of belief in Australia. When asked if she wished for such freedom in China, she said, “Of course! I hope to see that day!”

Mr. Xu and his father are from Jiangxi Province in China. Mr. Xu told the reporter, “You wouldn’t be able to see a parade like this in China. Even gatherings with many people aren’t allowed.”

Xu has spent two months in Australia and enjoyed the freedom of being allowed to access independent media, including the Epoch Times and YouTube. Both Mr. Xu and his father decided to quit the Communist Youth League after speaking the practitioners.

Mr. Li, an immigrant from Hong Kong, told a Falun Gong practitioner, “I have always supported Falun Gong.” He said he had no doubt that the spread of the novel corona virus was the Chinese Communist Party’s fault. He believed the CCP’s days were numbered.

Practitioners in the Parade

This was the first time Trong has taken his three children to the Australia Day Parade. He was very happy that so many people were able to see the Falun Dafa procession and the principles of Truthfulness-Compassion-Forbearance. “Everyone is very happy. Many people waved at us and cheered for us. I believe this is a really wonderful thing for these people.”

Trong has practiced Falun Gong for three years and said he has benefited so much from the practice. He works at a travel agency and in the weekends takes his daughter and older son to practice the Falun Gong exercises in a local park.

“Falun Dafa teaches people how to be good people. I hope my children will forever remember Truthfulness-Compassion-Forbearance in their hearts and become good people,” he said.

“My children are sometimes naughty and that helps me cultivate my patience and kindness. In the future they will know how lucky people are to obtain Dafa and will be very thankful for everything,” he said.

His daughter Ngoc said, “My brothers are sometimes naughty. After I started to practice Falun Gong I became more forgiving and don’t lash out at them. At school, if a classmate says something mean I don’t hold it against them. I find my school work and homework easier. I don’t feel pressure.”

Kim grew up in a family of Buddhist believers and said she had always wanted to practice cultivation. Last May, she accompanied a friend to the hospital. After seeing the suffering there she felt a deep awakening. She had a strong desire to find a cultivation school that would allow her to be free from the cycle of birth-aging-illness-death.

After searching online for Buddhist teachings about the universe’s mysteries, and the correlation between the heavens and mankind, she eventually came across Zhuan Falun, the primary text of Falun Gong. She read the whole book in one sitting and felt tremendous changes in her heart, and even her thoughts and physical body. She told herself, “This is a true practice. I have finally found it.”