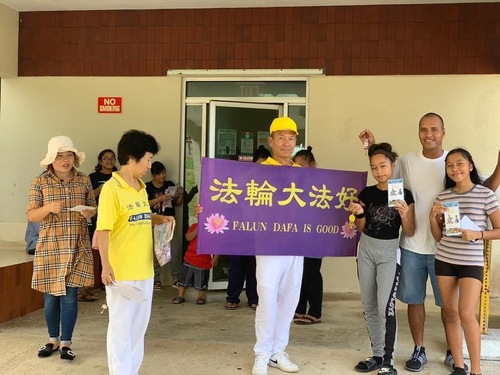 Falun Gong practitioners in Saipan went to Tinian and Rota islands in October and November 2019 to introduce the spiritual and meditation practice to locals.

They distributed origami lotus flowers to passersby and told people about Falun Gong’s principles of Truthfulness-Compassion-Forbearance.

Rota has a small population. Practitioners distributed fliers and paper-folded flowers at a local supermarket.

There, the practitioners introduced Falun Gong to the public and distributed fliers.

They also talked about the Chinese Communist Party’s (CCP) persecution of Falun Gong in China, including its state-sanctioned killing of practitioners for organs. Many people expressed sympathy and condemned the persecution.