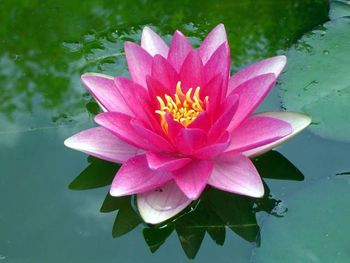 A few days ago my manager at school said to me, “There are very few people like you nowadays.” I thought that he was flirting with me.

“I mean it,” he continued. “I regard you as my older sister (although he was only a year younger than me). I admire you because I like how you conduct yourself.”

Little by little, he liked to talk to me about things that bothered him. I explained to him my understanding of the Fa. He appreciated my words, and came to trust me. Eventually his behavior improved, and he seldom got angry.

He often said, “I’m learning from you.”

To me, that meant he accepted the teachings of Falun Dafa.

Persecuted for My Belief

I was arrested three years ago, while I was out clarifying the truth and was illegally detained for a month.

I was then taken back to school but wasn’t allowed to teach. Instead, I sat around and did nothing while my teaching post remained empty.

I wrote a letter to my manager, telling him how Falun Dafa helped me become a better person. But I wrote the letter without considering the manager’s point of view, and he became angry. He thought that I created a lot of trouble for the school, yet I denied my wrongdoings.

I was not hired to teach the following academic year because I practice Falun Dafa. After being laid off, my reputation was in ruins. People were making jokes about me, and many colleagues looked down on me.

I knew that all of this misunderstanding was caused by the lies and propaganda put out by the Chinese Communist Party (CCP) about Falun Dafa.

However, a kind manager sympathised with me. He said, “I know the CCP, and I’m afraid you’ll suffer. You didn’t get hired because you refused to stop practicing Falun Dafa.”

I was a little scared. I approached the management a few times, but they just wouldn’t give me a job. Later, in order to better monitor me, they made me report to the office to sign in and out. But there was no specific task assigned to me.

I couldn’t focus on Fa-study during that time, and I couldn’t eat or sleep well. I lost about five or six kilograms (11-13 pounds) in just a few days.

It felt like I lost everything. My husband also fought with me, blaming me for not taking his advice, and even threatened divorce.

The management planned to put me in another department, as long as I was willing to write a guarantee statement not to practice Falun Dafa. But if I didn’t write it, I wouldn’t be allowed to go.

I was faced with two choices: One was to persist in my practice of Falun Dafa, but I’d lose my job and my family; the other was to write a guarantee statement to give up Dafa.

“But normally when a problem arises, if it does not irritate you psychologically, it does not count or is useless and cannot make you improve.” (Lecture Four, Zhuan Falun)

I had one hand holding on to things that ordinary people value, while the other hand wouldn’t let go of the Fa.

My daughter saw that I was worried, and asked why. Normally I didn’t talk to her about these kinds of things, but I told her this time.

She said, “Mom, you’re greedy. You want Dafa, and you also want other things. How can that be possible?

If you want to persist in practicing Dafa, I’ll support you. Don’t think about it too much. I’ll make money to take care of you. Why are you so afraid?”

Immediately, I understood what I needed to do. Master was encouraging me through my daughter’s mouth.

I needed to have a broader way of looking at things, and let go of my attachments. I shouldn’t tightly hold onto worldly matters. I am very fortunate to have found Dafa and nothing is worth my giving up the practice.

I went out to study the Fa, and share my understandings with other practitioners. Everyone encouraged me to firmly believe in Dafa and Master Li (the founder). Once I made my decision to stay with Dafa, I felt that a heavy load had been lifted off my shoulders.

Things also turned around after I made my decision. The manager who wanted me to write a guarantee statement told me to return to work. When I got to the office, he was like a different person. He didn’t mention anything about the statement. He just smiled at me, and said, “Please go help out one of the managers. He needs your help.” And so I went back to work.

Looking back at what I went through, I realised that I didn’t let go of things that I should have. When I was detained, all I had in mind was: “Don’t lose my job.” And I clung on to this notion after I was released.

For several months, I had to choose between Dafa and my job. Things only got resolved when I made the right decision. I understood that once again I had made trouble for my cultivation.

This experience was like riding a roller coaster, but I felt that Master was with me all the way. I was determined to do well the things that Dafa disciples are required to do.

When I started working again, things weren’t the same as before. The original manager was promoted, and the new manager needed a hand.

Nobody wanted to be the assistant, but I felt that no matter where we are, we should do what Dafa requires. So I put my mind to the work at hand.

My first task was to clean the office. The former manager had lots of documents piled up everywhere, and dust covered the tables, cabinets, and printers. I sorted and filed all of the paperwork, then I scrubbed and cleaned everything.

In a few days, the office was sparkling. People were surprised at the cleanliness. I just smiled.

I also paid attention to other matters, like ensuring that nothing was wasted. I even sold the waste paper. The manager told me to keep the money I made, but I didn’t keep any of it. Instead I gave it to the school.

There was a sink in the office that was blocked. Many colleagues had a habit of dumping leftover tea in the sink, and after a period of time a thick stain had formed and was difficult to remove.

I brought some cleaning products from home, and after a few days of scrubbing, the stain was finally removed, and the sink was like new.

Garden workers sometimes used the bathroom in our building. They traipsed through, bringing in dirt and making the entire corridor and bathroom muddy and dirty. I didn’t say anything, and just cleaned things up.

Whatever the manager asked me to do, I would do it. In less than two months, the manager informed me that I could teach again.

My performance rankings as a teacher were in the top tier several times. But when the report was submitted to the school they couldn’t mark it as “excellent”, and my manager had to change it to “adequate” because I practice Falun Dafa.

The manager came to me, and said, “I tried to fight for you many times, but they said that I couldn’t give you top marks. These orders came from above.”

I smiled, and said, “Don’t worry. I understand. Thank you for your kindness.”

Having the Fa in My Mind

As time went by, my manager and colleagues came to recognise my efforts and performance. They changed from not understanding me to supporting me.

Female colleagues in the office often gossiped among themselves. One day, one of them said, “Look at Xiaoyu (me)! She’s never exercised, but she has a fair complexion. She is healthy and strong.” This colleague asked me if I have any secrets for my appearance.

I replied, “I practice Falun Dafa.”

Later, she asked me many questions about the practice and repeatedly said that Falun Dafa was excellent. This colleague also changed, as she wasn’t as pushy as she used to be, and she regarded me as the most trustworthy person.

Another colleague once took me into her office. She closed the door and asked me to show her the five sets of exercises. She liked them and encouraged me to continue doing the practice.

There are many fruit trees in the school garden, and it makes the place look very colorful in the spring and summer. My colleagues went out to pick the fruit for themselves, but I wouldn’t join them.

They teased me, and said, “If you don’t pick them, others will.” I didn’t say anything and just smiled.

When we have time to chat, I usually tell my colleagues about traditional culture and moral standards. I noticed that they changed their behavior little by little. They even stopped picking the fruit in the school gardens.

I will continue to conduct myself using the Fa principles of Truthfulness-Compassion-Forbearance. I won’t pay attention to any personal losses or gains or hold a grudge against anyone.

When I am faced with problems, I will unconditionally look inward so that I can better harmonise with Dafa. I want to be the happiest being in the universe!