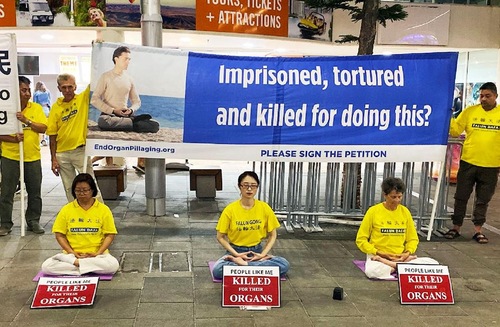 They introduced Falun Gong and told people about the Chinese Communist Party’s (CCP) persecution and organ harvesting from living practitioners.

Many people stopped to learn about the ancient spiritual practice and the persecution in China.

“We support you! The persecution must stop,” said people who stopped to learn more. Many also signed a petition calling for an end to the persecution.

Diana Hallas said she was saddened by the brutal persecution. She said she follows the news about the human rights situation in China.

They said that the Australian government should deny entry of any CCP officials involved in the persecution and make the right choice between human rights and economic interests.

John Davis, a local resident, signed the petition and condemned the CCP’s atrocities. He was interested in learning the exercises and was happy to hear that they were taught for free at the local group exercise site. He said, “I’ll definitely go tomorrow.”