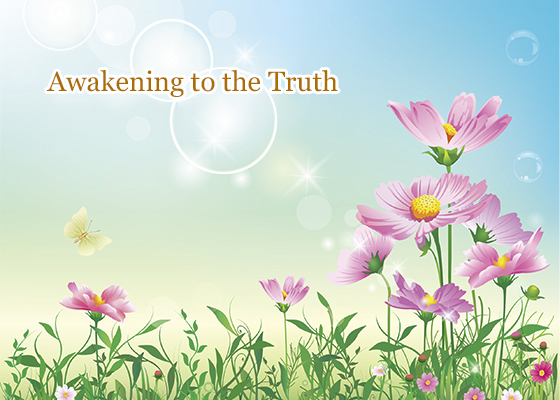 During the past 20 years that Falun Gong (also called Falun Dafa) has been suppressed by the Chinese Communist Party (CCP), its practitioners have made great efforts to clarify the truth about this cultivation practice to people and debunk the Party’s inflammatory propaganda.

After hearing how the CCP has been persecuting innocent people in all its campaigns, including Falun Dafa practitioners today, many people decide to sever their connections with the communist regime.

Plainclothes officers often patrol the streets, either to monitor Falun Gong practitioners or for other purposes. They usually hold a briefcase or umbrella or a cell phone, pretending to be regular pedestrians.

Some of them have heard the facts about Falun Gong from practitioners already and just go their way without harassing them. “I just want to be able to eat and sleep well and not have a guilty conscience,” one officer once remarked.

I recently saw one of theses officers walking the streets. I smiled at him and said in a low voice, “I know what you’re doing here.” He smiled back and didn’t say anything.

“I am a Falun Gong practitioner (he knew that already),” I continued, “so I want to encourage you not to do bad things to harm the innocent.” I then clarified the truth and debunked the CCP’s defamatory propaganda about Falun Gong such as the staged Tiananmen Square self-immolation.

“You know, the CCP could fall from power at any time for all the crimes it has committed. We don’t want good people to sink with it,” I added.

When I suggested that he quit the CCP organisations with a pseudonym, he smiled, nodded, and raised his right arm in agreement.

“It can never be a crime to become a better person by following the principles of Truthfulness, Compassion, and Forbearance. And please keep in mind that ‘Falun Dafa is good.’” I said.

Raising his right arm, he once again smiled and nodded.

I spoke to a young man sitting at the entrance of a government agency. As I talked about Falun Gong, he appeared arrogant and did not want to listen. “I work in the courthouse and won’t listen to stuff like this,” he said.

“People are all talking about how corrupt the Party is,” I said. “Since you work in the courts, you must be well aware of that. Someone told me that court officials accept bribes from both plaintiff and defendants—is that true?” The man looked surprised and said, “That’s actually true.”

I told him how the CCP had spread lies to stir up hatred against Falun Gong. For example, the self-immolation hoax on Tiananmen Square. The little girl could sing four days after a tracheotomy (impossible) and her entire body was wrapped in gauze despite severe burns—totally against standard medical practice.

I asked again if he would like to quit the CCP organisations, and his attitude changed 180 degrees. “All right, I will quit,” he said.

No Longer Fooled by the Party

I greeted a man on the road and began to talk about Falun Gong. “No way!” he waved his hand and said, “I don’t want to listen to that—I will go wherever the Party goes.”

I explained that following the Party only meant going down a path of destruction. “The CCP is rotten to the core. Of the 204 members of the CCP Central Committee [the highest power in China], 187 have immediate family members living overseas. For those who are ministers or higher, 74.5% of their children—and 91% of their grandchildren—live in the United States,” I said.

I also told him that the CCP had robbed the people while leading the country in a wrong direction. For example, Falun Gong practitioners are innocent people who want to become better citizens. By suppressing them and destroying traditional values, the CCP is heading down a path of no return.

“That makes lots of sense!” he replied. He decided to renounce the CCP and its youth organisations and thanked me for telling him that.

At a Farmer’s Market

In the late afternoon, I saw an elderly woman standing in front of a table selling fruit at the farmer’s market. There was a needle for an intravenous injection in her hand, so I assumed she had just been released from a hospital. I talked with her about Falun Gong. “We have to listen to the Party,” she answered.

I found out that she was a CCP member and said, “The Party does not contribute anything to the country other than harming its citizens and extorting money from them. The country would be much better off without it.”

The fruit vendor agreed that Falun Gong was very good. He said, “Someone in my village had arm pain, and he recovered after he started to practice Falun Gong. Otherwise, he would have spent lots of money on medical bills—he was so fortunate to learn Falun Gong.”

The woman listened quietly and later agreed to quit the CCP.

I saw a man in the neighborhood picking vegetables in his garden. He was wearing a police uniform but I went over and talked to him about the CCP. “Aren’t you afraid I might arrest you?” he asked without raising his head.

“No, I am not afraid, because you are a nice person,” I replied. He looked at me and smiled.

He asked, “Why do you guys always talk to people and ask them to quit the CCP?”

“It is because we want people to be safe,” I said. “You see, the CCP has persecuted so many innocent Falun Gong practitioners and pressured them to stop living by Truthfulness, Compassion, and Forbearance. They are detained and tortured in prisons and brainwashing centres. Throughout its history the CCP has harmed untold numbers of people. Our entire society has now become corrupt and greedy. Isn’t our society in danger?”

I told him how Falun Gong improves people’s minds and bodies, and I gave him examples of people who supported innocent practitioners being blessed for their kindness. He quit the CCP and thanked me.

One of my friends is a martial arts instructor. After I talked to him about Falun Gong, both he and his wife were willing to listen to audio files about it.

When I visited him the other day, he had a visitor. As we began to talk about Falun Gong, the martial arts instructor said, “People all over the world like Truthfulness-Compassion-Forbearance. It is just that former CCP leader Jiang Zemin had problems with it and banned it for no reason.”

The visitor just sat there smiling, without saying anything. When I chatted with him, he said his job was dealing with Falun Gong practitioners. “He is a veteran police officer,” said the martial arts instructor.

“In the past, many practitioners went to Beijing to appeal [for the right to practice Falun Gong]. I took them back and treated them well—giving them water and taking good care of them. When they saw me after they were released, they always said hello,” said the officer.

“You know what? It was he [the veteran police officer] who first gave me Falun Gong materials to read, so I knew it was good,” added the martial arts instructor.

“To be honest, Falun Gong is indeed great,” the police officer said with a smile.