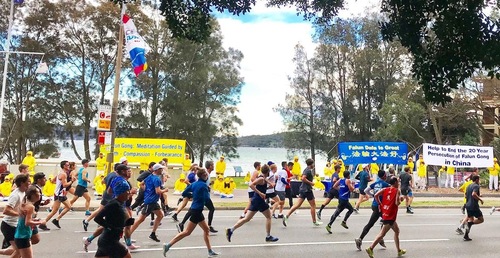 The City to Surf marathon in Sydney, Australia is one of the largest running events in the world by participation. It attracts around 80,000 competitive and fun runners each year who race 8.7 miles (14 km) from Sydney’s Central Business District out to Bondi Beach. This year the marathon was held on August 10, 2019.

Different performers traditionally gather along the marathon route to provide entertainment. Falun Gong practitioners also participated along the race route this year by providing an exercise demonstration in the beautiful coastal neighborhood of Rose Bay.

Athletes and spectators alike learned more about Falun Gong’s journey of resisting the Chinese Communist Party’s (CCP) persecution, and many encouraged practitioners in their efforts to seek justice for Falun Gong.

City to Surf’s goal is to raise $5 million for more than 900 charities, and many people take part to help achieve that goal.

Many marathon participants gave practitioners high-fives, and some stopped to sign a petition calling for an end to the persecution. Practitioners set up large banners behind the exercise demonstration that read, “Falun Dafa Is Great,” “The World Needs Truthfulness Compassion Tolerance,” and “Help to End the 20 Year Persecution of Falun Gong in China.”

Some runners called out, “Falun Dafa is great!” “Wish you success!” “Keep up your great work!” “Proud of you!” and “Thank you!”

Dr. Rekha Rao signed the practitioners’ petition and said that she was saddened to learn that the persecution is still happening in this day and age and that we need to fight for freedom.

She also said Truthfulness, Compassion and Forbearance are principles that would help us find our inner peace. She told practitioners, “The world needs such a voice! Keep up your great work! Never give up! I wish you the best! I’m proud of you!”

Dr. Rao wanted to tell Falun Gong practitioners in China: “I understand the difficulties you are facing. It’s very hard! Please don’t give up your beliefs because of the persecution, because the meaning of life doesn’t lie in the length or how you live, but in your beliefs, and your fight against the evil.

We need to awaken more people to support justice. The more you call, the more supporters you get, and the more you will win!”

Dr. Phillip Vitols and his mother signed the petition to support Falun Gong. Dr. Vitols said he was appalled to hear that Falun Gong practitioners had been killed for their organs. He said it is the most evil crime in history and should stop immediately.

Dr. Vitols said patients in his hospital would wait for years for a matching organ. He couldn’t imagine how a matching organ could be found in just a few days in China and said it had to be murder.

He planned to tell his colleagues about the issue and ask them to warn their patients not to obtain organ transplants from China because they would be complicit to murder.

Ms. Eileen O’Neill, a therapist, signed the petition and praised Falun Gong practitioners for their work. She said she was saddened after hearing about the persecution of Falun Gong in the news.

Ms. Le Thi Hai Duong said one of her Chinese coworkers had introduced the book Zhuan Falun to her and another friend and told her about Falun Gong. She had decided to learn Falun Gong despite the propaganda spread by Chinese state-run media because she believed Falun Gong was beneficial to health.

She said she had a great experience today and that everyone should make their own judgments independently.