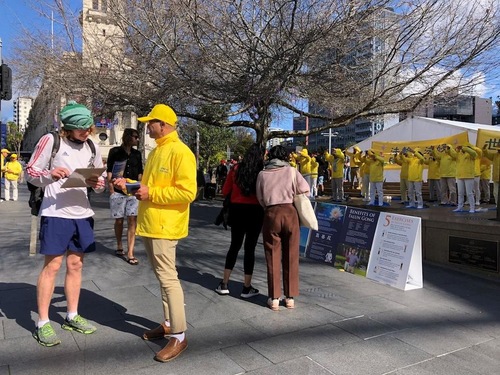 Many people said they were appalled by the Party’s brutality and encouraged practitioners to continue their efforts.

Kale Wimmo is an artist. He said the CCP’s state-sanctioned killing of practitioners for organs is inhumane and violates human rights. He said he first heard of the persecution from a friend ten years ago and that the CCP has not changed at all.

Kale said that China has a long history and said it was incredible that the CCP negates China’s traditional beliefs of Confucianism, Buddhism and Taoism. Instead, it is driven by monetary interests, he observed. He hopes Western countries will pressure the CCP by imposing economic sanctions.

“If the CCP does not respect human rights, the whole world should not import Chinese products,” Kale said. “Falun Gong practitioners are continuously letting people know the truth.”

He added, “You can publish the facts about the persecution in local magazines and newspapers in New Zealand, and of course on social media networks. I believe that people will eventually understand that this is a big issue.”

He said, “If everyone sees the photos of the people who are being persecuted, it will have a great impact. People will talk about it and will be shocked by what is happening in China.”

Before he left, Kale signed the petition calling for an end to the CCP’s live organ harvesting.

“All People Should Know the Truth”

James Burns owns a digital marketing company in Auckland. He said that he had seen a documentary film about the CCP’s harvesting of organs from living Falun Gong practitioners. “It’s really scary,” he said. “Falun Gong practitioners were taken away from their homes, put into prison, and then subjected to live organ harvesting. The truth is being covered up. In particular, this is a persecution at the national level imposed by the CCP. The persecution is getting worse and worse.”

He said, “This is really serious and sad. It reminds me of the tragic events during Hitler’s time in World War II. Think about the victims under the CCP’s scalpel. It is torture, so bloody, and cruel. But this is happening now, in the 21st century. I think all people should know the truth.”

Chris Smith traveled to Auckland from another city in New Zealand. After he saw the practitioner’s event downtown, he joined them and did the exercises. Afterwards, he said he could feel the energy field, as well as happiness, tranquility and peace.

He encouraged practitioners tocontinue their efforts, “Go to the MPs, lawyers, and the UN. You must keep doing it. Never give up!”