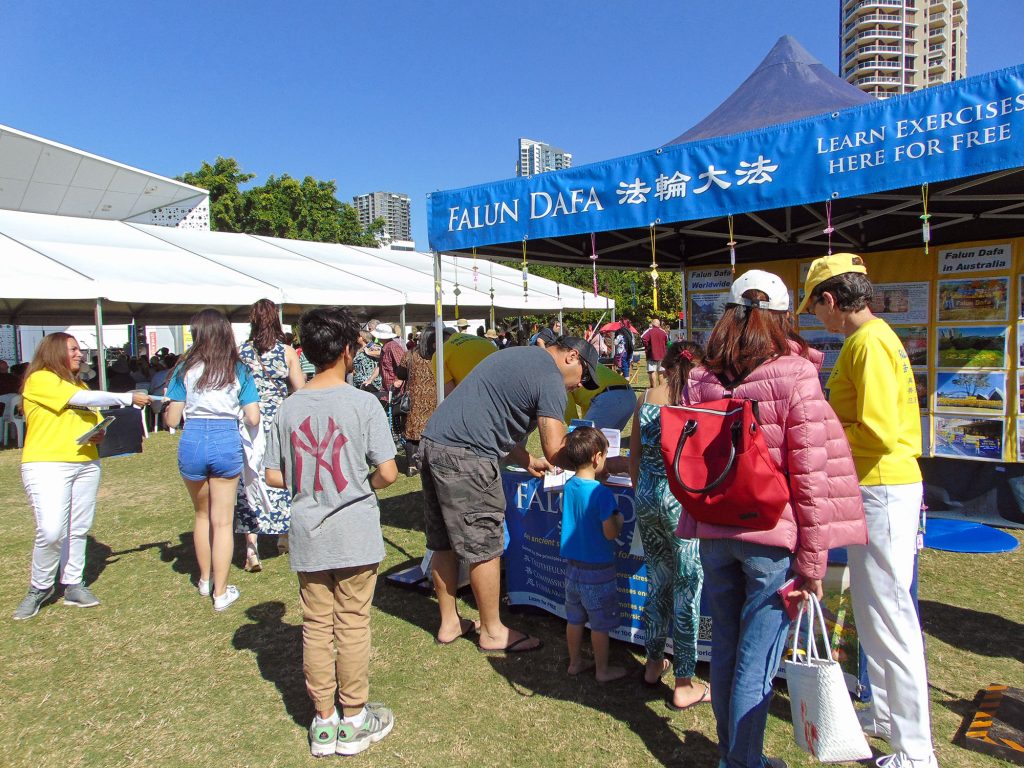 Australian Falun Dafa practitioners received a warm welcome back to the annual Gold Coast Multicultural Festival in Queensland on August 4, 2019.

The event funded by Gold Coast City Council attracts more than 20,000 locals and visitors each year to the iconic Broadwater Parklands in Southport.

Greens candidate Amin Javanmard, who contested the Queensland seat of Bonney back in 2017, stopped by the Falun Dafa stall manned by practitioners. He wanted to know the outcome of a recently activity practitioners held locally to commemorate 20 years since the Chinese regime began persecuting Falun Dafa in Mainland China.

After hearing the event was a success, he became pleased and immediately signed a petition to the Australian House of Representatives about the continuing organ harvesting against practitioners in Mainland China. He and his family members received lotus flowers and felt very touched after hearing the meaning of the lotus flower is peace and purity in traditional Chinese culture.

Lisa, who recently had surgery to remove colon polyps, overheard a practitioner introducing the exercises to someone else and started copying the movements depicted on the A-frame Falun Dafa sign. When the practitioner offered to teach her exercises, she agreed and learnt them on-the-spot.

While performing the exercises she could sense the energy around her abdomen area. After finishing she said she could feel it was a very special exercise and would attend the local practice site.

Victorian couple Lewis and Wendy spoke with practitioners during their vacation. Lewis had always believed in meditation and the principles of Truth, Compassion and Tolerance even though he had never studied Falun Dafa before. He was convinced it was fate that he would stay at a nearby caravan park and meet with practitioners at the stall.

Lewis also added that Wendy would not normally be able to walk 1.3km from the caravan park to the festival due to her recent breast cancer surgery and chemotherapy sessions. He was convinced that Falun Dafa would help him overcome his wife’s health challenges and his own longstanding drinking habits, and promised to attend the practice site.

A Western Australian lady, who had practiced tai chi and ancient Chinese medicine for many years, wanted to know what body parts move during the Falun Dafa exercises. After hearing the movements require the whole body, she found it very interesting and wanted to know where she could learn the exercises at the local practice sites.

Several people from Asian cultures also stopped by the stall and enjoyed hearing about the many health benefits of Falun Dafa, why the Chinese regime persecutes the peaceful practice, signing the petition and receiving a lotus flower.

Practitioners were also invited to demonstrate the Falun Dafa exercises on the stage, and nearly all of the audience members happily took a flyer. Some of them visited the Falun Dafa stall afterwards to find out more.