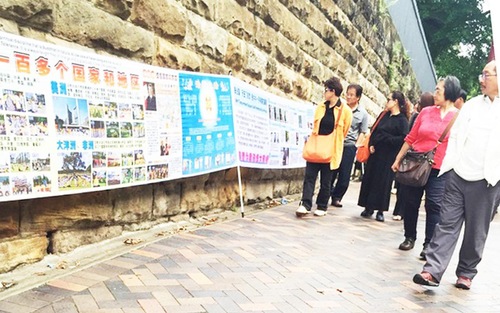 The Sydney Opera House is one of the most popular tourist sites in the world and many mainland Chinese tourists stop at this World Heritage Site when they visit Australia.

Falun Dafa practitioners come to the Opera House to reach out to these tourists and offer them information about Dafa that they cannot easily obtain in China, where any news about Falun Dafa is blocked or censored.

After learning the facts about Dafa and the persecution of this peaceful practice by the Chinese Communist Party (CCP), many Chinese tourists are eager to quit the CCP and its affiliated organisations.

When Chinese tourists first exit the tour bus at the Opera House, they are greeted with a yellow banner emblazoned with the Chinese characters “Falun Dafa Is Good” and “Truthfulness-Compassion-Forbearance Is Good.”

They then encounter display boards and more banners along the path that leads toward the beach and the Opera House.

The display boards introduce the beauty and benefits of Falun Dafa (also called Falun Gong), how it is practiced in more than 100 countries and regions worldwide, and information about the ongoing persecution in China.

May is a busy tourist season in Sydney. As a practitioner was showing a small handheld board to a busload of Chinese tourists, a Chinese man said, “You don’t need to introduce Falun Gong to me. I know you are all honest people that don’t cheat and lie.” He explained that he had been conned twice by Chinese people since the tour started.

The practitioner said she needed only a few minutes of his time. She then told him about the importance of quitting the Chinese Communist Party and its affiliated organisations. The man willingly agreed to quit the Party under a pseudonym name.

Then she said, “Please remember two sentences: ‘Falun Dafa is good’ and ‘Truthfulness-Compassion-Forbearance is good.’ If you truly believe this, you will be blessed. You have quit the Party so you are no longer controlled by it. Your life will become peaceful and happy.”

The man appeared very pleased and said that his family was waiting for him on the other side of the Opera House, so he and the practitioner walked together and continued chatting. Soon they came across two women – his wife and his younger sister.

The practitioner spoke to them and told them about the importance of quitting the Party. Both women happily quit the Party-affiliated organisations they had joined while in China.

A large group of young people from a prominent Chinese company stopped at the Opera House one day. A Falun Gong practitioner showed them a banner that listed some free software that would allow them to break through the “great internet firewall” in China and read news from the free world and information about how to quit the party.

A Chinese man came by and attempted to block the banner using a board printed with the bus number. The practitioner said to him politely, “Sir, why do you do this? Are you one of those people who is paid by the Chinese Communist Party to promote communism in Australia?

If so, you are in danger. Australia has recently passed counter-espionage and foreign interference laws. The government is looking for those who work for [foreign countries] and will expel them.

“If I call the police, you will be in real trouble. You won’t be allowed to enter Australia again and if you are a permanent resident, that status will be revoked.”

The man stopped trying to interfere with the practitioner.

Another bus arrived and Chinese tourists began to walk toward the Opera House.

One man in the group accepted a book titled The Ultimate Goal of Communism from a practitioner. A Chinese woman attempted to snatch the book from his hand, but he stopped her.

A practitioner approached the woman and said, “You are not allowed to force other people. This is a free country. Everyone can decide for themselves whether they want to read our materials. You have violated the law in this country, but you also committed a sin from the viewpoint of divine beings.

“It is like someone who is about to drown and we’re trying to pull him out of water, but you block him from being saved.”

The practitioner then turned to the other tourists and asked, “Friends, do you understand what I said?” Many of them answered, “Yes, we understand.”

The woman didn’t appear upset at all by the practitioner’s words. Instead, she appeared quite relaxed and a lot happier.