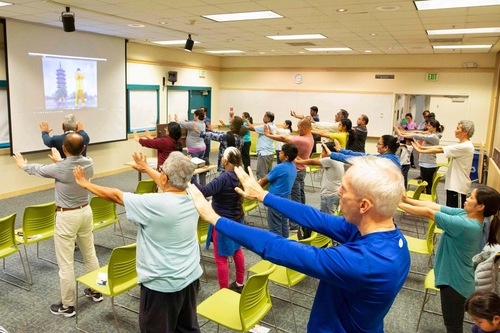 During the free Falun Gong workshop at the Fremont Main Library on April 30, 2019, dozens of people from all walks of life and from different ethnic backgrounds living in the San Francisco Bay Area came to learn.

Relaxation of Mind and Body

Urvashi Anand used to suffer from many illnesses. She found the movements very good. “I feel great, and I know this is something I need to do,” she remarked.

Anish Babbar, a software developer in Silicon Valley, said he felt relaxed and could feel the energy from the practice. “I also like it because you can do it at any time and in any place, including at home,” he added.

David Lun works for a construction company. He believes that the exercises would benefit himself and his children. He said, “It reduces stress. My mind was calm and clear, free of random thoughts.”

Arviend Bhadat is from India. He had just heard about this cultivation practice for the first time. He said, “I felt strong energy when doing the movements. I think bad things have been removed from my body.

The practice is so good and I will absolutely recommend it to my friends.” He also thanked practitioners for volunteering to teach it and said this will benefit society in general.

Seema Raman from Iran just had a baby and found life stressful. The practice made her feel refreshed and filled with energy. “I feel great now,” she said, “When I was doing the exercises, my hands were warm and it was wonderful.”

“Our Society Needs This”

Krishna Narayanan had not heard about Falun Gong. He noticed the practice could keep him clear-minded and it was a great experience. “I will definitely continue with it,” he remarked. “In particular, I like the principles of Truthfulness-Compassion-Forbearance.”

Nina, a Vietnamese immigrant, who brought her three children, found the workshop very helpful. She explained, “I actually looked it up on the internet before I came. The principles of Falun Gong really impressed me.” She said she learned a lot from the session and would like to join the group exercises in the park.

Chinese immigrant Situ Weirong from Guangdong Province said that he had watched the exercise teaching video at home before coming to the workshop. Based on what he had heard and observed, he praised the principles of Falun Gong, and practitioners’ efforts to promote them. He said, “Our society needs this [Falun Gong].”

Having heard about the persecution in China, Situ was a little upset, because many Chinese were influenced by the defamatory propaganda from the Communist Party. “It’s a pity that many people blindly believe the news media, and do not look into it. This is something we don’t want to miss,” he said.