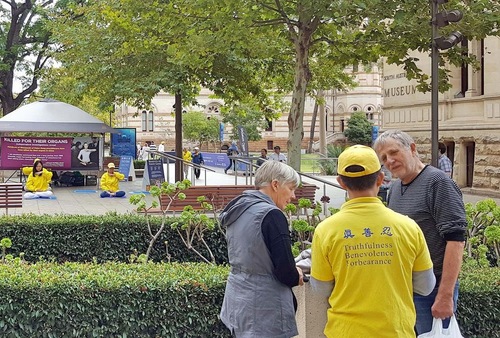 Falun Gong practitioners from South Australia gathered in Prince Henry Garden in Adelaide on April 21, 2019, to commemorate the 20th anniversary of the April 25th Appeal in Beijing.

They told people about the Chinese Communist Party’s (CCP) decades-long persecution and collected signatures to support lawsuits against a former CCP head who initiated the persecution. Many people encouraged them.

Attracted by the music, Chinese students and their families from the University of Adelaide stopped to read the display boards and take information. They said that they knew Falun Gong was good and that they were opposed to the persecution.

Liu, a student from China, said that he knew the CCP was evil. After coming to Australia he was able to research Falun Gong online and now understands the truth. He agreed to quit the Young Pioneers, a CCP youth organization he had joined as a child.

Liu was surprised to see people of different ethnicities doing the exercises. A practitioner explained that people in more than 100 countries practice Falun Gong.

Barbara, a Western practitioner, said, “Practicing Falun Gong has given me a calm mind. I learned to put others before myself. Now, both my body and my mind are relaxed.” Liu smiled and thanked her and said he would continue to follow the news about Falun Gong.

Mr. Li and his children asked many questions about the April 25th Appeal. Mr. Li said, “It’s great that you can commemorate this anniversary openly in another country. You won’t find that kind of freedom in China!”

Mr. Li said that he had withdrawn from the Communist organisations he’d joined when he took a phone call about it. His family took the newsletters and expressed their thanks.

A Chinese mother and her son were hesitant at first to take any information. After they learned how the CCP orchestrated its propaganda campaign to smear practitioners, beginning with the ‘Self-Immolation on Tiananmen Square,’ they accepted a copy of “The Ultimate Goal of Communism” and said they would read it.

When three young Chinese men happened to pass by, they accepted the information but then said, “We know the Communist Party is persecuting Falun Gong, but we can’t understand why you are political.”

A practitioner explained, “We talk to people and clarify the facts in order to stop the persecution. That is not ‘getting political.’” They listened and took a copy of “The Ultimate Goal of Communism.”

Senaeta watched practitioners setting up their booth that morning and asked, “Do you teach the exercises?” After a practitioner showed her the exercise movements she said she felt a powerful energy. She took a copy of the introductory materials and said she wanted to continue doing the exercises.

Roland from Melbourne told a practitioner, “I meditate. It helps me relax and de-stress. I’m very interested in your meditation. I will definitely read the introduction.”

Roland said he had heard about the CCP’s organ harvesting from living people. He said, “I don’t understand why the Communist Party is so afraid of such a peaceful group of people and persecutes them so badly. I can only say that the CCP lacks human nature.”

Ben joined the practitioners and began doing the exercises. He said he felt great and wanted to learn more about the practice. When he heard that thousands of practitioners in China had lost their lives due to the CCP’s persecution, he agreed it had to stop. He signed the petition and brought two friends over to sign as well.