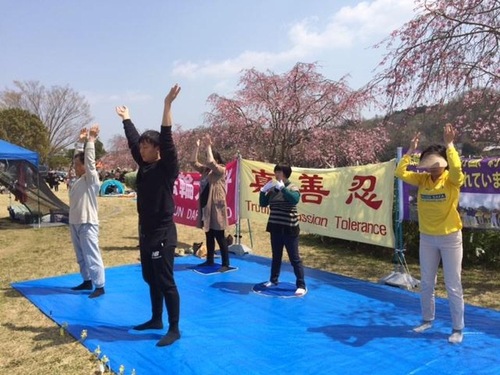 They offered free instruction to learn the Falun Gong exercises on the lawn and distributed information to passersby about the spiritual discipline.

The practitioners also collected signatures on a petition calling for the prosecution of Jiang Zemin, former head of the Chinese Communist Party (CCP), for initiating the persecution of Falun Gong in 1999.

The practitioners performed lion dances, gave a martial arts presentation, and demonstrated the Falun Gong exercises on stage on the afternoon of April 6. Many in the audience followed along with the practitioners’ movements on stage and learned the exercises.

The wife of the festival director brought baked fish to the event and shared it with the practitioners. She invited them to participate in the cherry blossom festival in the coming years.

Many tourists signed the petition. A practitioner said that this year they obtained the most signatures within the shortest period of time.

After signing the petition, one tourist said, “I saw news about this on television. It is true. I must sign the petition.”

Often, groups of tourists signed it together. Over 10 pages of signatures were collected within two hours. An elderly man and his wife signed the petition after hearing about the persecution and state-sanctioned organ harvesting from living Falun Gong practitioners in China. Their friends also signed.

“I especially hate the CCP,” said a shocked tourist, “How can they be involved in live organ harvesting? It is horrible!” She and her two friends signed the petition.

A family of seven came to view the cherry blossoms. The father signed the petition after learning of the organ harvesting crimes in China. He handed the petition to his wife and children, who all signed it. He told the practitioners, “The CCP is so evil. Keep up the good work!”

Chinese visitors also watched the performances. Falun Gong practitioners advised them to quit the CCP, the Communist Youth League, and the Young Pioneers.

When an elderly couple, their daughter, and their granddaughter were heard speaking Chinese, a practitioner greeted them and told them about Falun Gong.

The couple had come from Shenyang to visit their daughter and would return to China in a few days. They accepted a copy of the Nine Commentaries on the Communist Party and Falun Gong materials.

A middle-aged man came on Sunday morning when the practitioners were setting up the banners. A practitioner told him that people in over 100 countries practice Falun Gong but that it was being persecuted in China. He also explained the staged Tiananmen self-immolation incident that was meant to incite the Chinese people to hate Falun Gong.

The man said, “The CCP are bandits!” He took the informational materials and said he would read them at home. When the practitioner advised him to quit the CCP, he quit the Young Pioneers without hesitating.