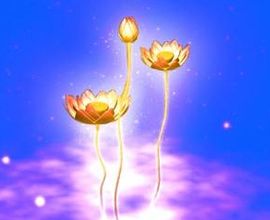 Another practitioner and I gave out New Year’s desk calendars this year. While doing so, we told people the facts about Falun Dafa and the persecution of it by the Chinese Communist Party (CCP).

Before going out to distribute the desk calendars, we send forth righteous thoughts to clear away any interference. We ask Master Li (the founder) to strengthen our wisdom when explaining the persecution so that people with predestined relationships with Dafa could understand.

There were many touching stories, and here are three I wish to share:

We once rode an electric motorbike to deliver the desk calendars in the countryside. We saw an elderly woman who was walking towards us. We stopped and greeted her, and we asked her what the name of the village was. She answered our questions with enthusiasm.

We gave her a 2019 desk calendar, and she said that she was here to visit someone, and shouldn’t take the calendar.

We said that seeing her was predestined and a blessing. We told her that Dafa practitioners distribute New Year’s desk calendars to those who have a predestined relationship, and that there is important information in the calendar.

We told her that Falun Dafa is the Buddha Dharma and has spread to more than 100 countries and regions in the world. After hearing what we said, she smiled, and replied, “I am only visiting here. So I feel embarrassed to take it. If I take it, someone else will not have it.” However, we encouraged her to still take one.

She treated us like her long-lost relatives, and told us about her past. She said she was the accountant for this village for decades, and that she never took a penny that was not hers, unlike how people are today.

She was eighty-five years old, tall, straight posture, clear-headed, and had traditional compassion. We said, “Your good deeds have brought you such good health and blessings.”

She told us her name, and her kind and happy expression were really as if she had met long-lost relatives.

When we came to a small alley, we saw two elderly people who were drying Chinese cabbage. The other practitioner stood at the door, greeted them, and asked if anyone had given her a desk calendar.

She replied loudly: “No.”

I saw that the man was still working on flipping over the cabbage, and I went over to say hello to him.

“Now I can hear,” he said. I told him that there was the truth about Falun Dafa in the calendar. He then asked,“Is there a Falun Dafa book?”

The fellow practitioner said yes and handed him a copy of “The Ultimate Purpose of Communism.”

The man kept talking and said: “I love that book. Now there are no good people among government officials. I don’t like what they do.”

His wife interjected: “He used to be the village head for twenty years.” The other practitioner then told them about the three withdrawals and how good will be rewarded, and evil punished.

The man then said that he used to be a CCP member but that he had quit. He also said again about how he liked the Falun Dafa book.

We rode our motorbike to the exit of another alley. We saw a woman burning waste, which gave out a pungent smell and black smoke. We parked the motorbike and walked to her. She asked us what we were doing.

We explained that we were here to give her blessings. She asked,“What blessings?”The other practitioner said, “It is the 2019 Dafa desk calendar.”

She replied, “My husband often goes to the city to buy pig feed. There are often Falun Dafa practitioners who gave him books and CDs.”

She went on to say, “When he had time, he read those books and watched the CDs. My husband said: ‘I believe in Falun Dafa and Truthfulness-Compassion-Forbearance!’”

She got a little excited and repeated it several times. She also told us a story.

Once, her husband was driving but kept dozing off. He was scared, and quickly recited “Falun Dafa is good! Truthfulness-Compassion-Forbearance is good!”

“He came home and told me: ‘It really worked! I was no longer sleepy.’”

She said that Dafa practitioners had told him that when he was in distress, he can recite Falun Dafa is good! Truthfulness-Compassion-Forbearance! “It does protect our life and keep us safe,” she said.

We asked her: “Have you made the three withdrawals?

She said that she was not a CCP member and had not been in the youth league. However, she said that she had joined the youth pioneers when she was in elementary school. We said let’s wipe out that evil oath! She said: “Then I quit.”

The fellow practitioner then said that there was a cultivation story from a centenarian in the calendar. The woman wanted to look at it. When she realised that her hands were dirty and had left a black hand print on the calendar, she tried to use her clothes to wipe it, but the clothes were dirty too.

She said she was going to go back to the house and wash her hands and then look at the calendar again.

She understood the preciousness of the desk calendar and knew it was not something that could be bought with money.

In fact, people are waiting to hear the truth about Dafa and are grateful to receive the informative desk calendars.