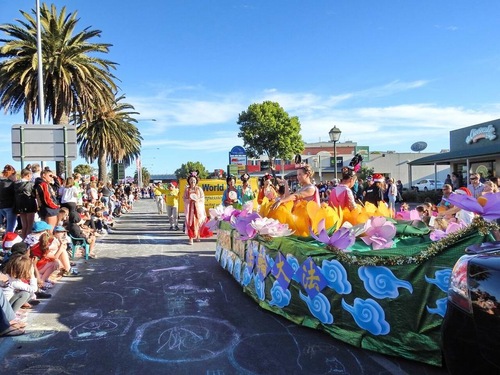 Falun Gong practitioners recently participated in Christmas parades in Port Adelaide on November 17, and in Norwood on November 22, 2018.

Their entries received great reviews from both hosts and spectators. This is the 14th year that practitioners have been invited to the parade in Port Adelaide.

Blue banners preceded the procession, followed by a float colorfully decorated with lotus flowers and clouds. Celestial maiden dancers and children on the float demonstrated the sitting meditation exercise.

Practitioners in yellow outfits followed the float and greeted spectators. The Falun Gong group was warmly applauded as spectators waved at them and took photos. 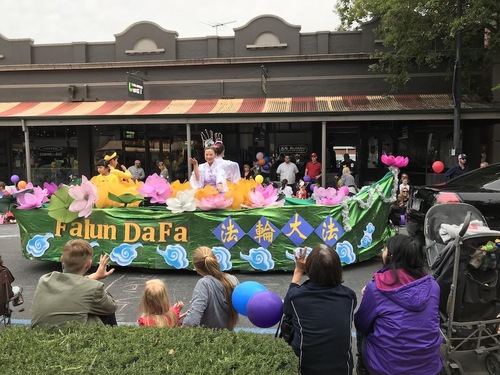 Ms. Li, who watched the parade in Norwood, said that she often sees Falun Gong floats in major events. “It’s beautiful this year. The last time I saw it was on Australia Day,” she said.

Mr. and Mrs. Wang brought their baby to the parade. They said that they respected the practitioners’ freedom of belief and agreed with the principle of “Truthfulness, Compassion, Forbearance.”

Mr. and Mrs. Zhao came from Inner Mongolia to see their grandchild. They were happy to see the practitioners in public. Mr. Zhao said, “One can’t see this in China because of the persecution.” 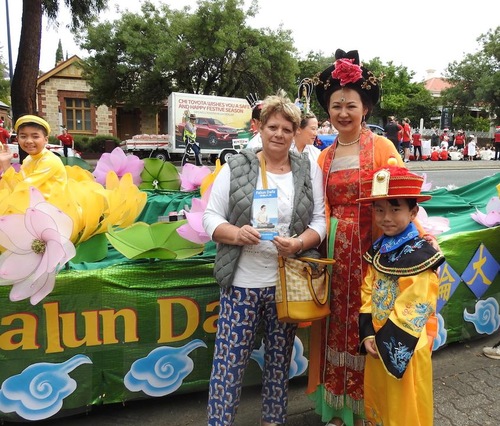 A spectator takes a photo with practitioners in front of the float.

Happy to Learn about Falun Gong

Jake Hall-Evans, liberal candidate for the upcoming federal election, posed for a photo with practitioners. He shared it on his Facebook page and said, “Thank you Falun Gong in Adelaide & SA for sending me this picture from the Port Adelaide Christmas Pageant on Saturday. I enjoyed hearing about truthfulness, compassion and self-control, all good qualities for a person aspiring to represent their community! I look forward to coming to your classes and workshops in the future.”

Several volunteers for a local radio station were interested in learning Falun Gong. They were glad to learn that practitioners offer free workshops.

Eddy told a practitioner that he used to practice Falun Gong and wanted to resume practicing, and left his contact information. 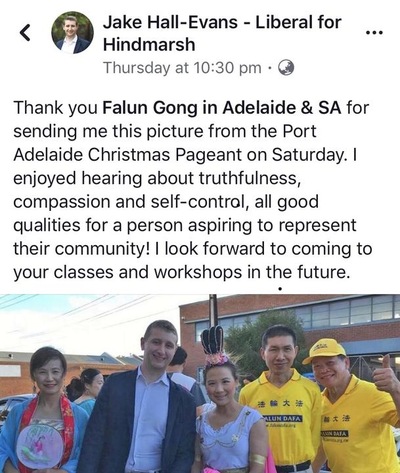 Jake Hall-Evans, liberal candidate for the upcoming election, shared his photo with practitioners on Facebook.

This is the first time that Lee McClymont has participated in the parade. He said, “My life was a mess. After I became a practitioner, I experienced dramatic improvements, both physically and mentally. I found my way in life and believe that Falun Dafa is good.”

Tran brought her son, daughter-in-law, and granddaughter to the parade. She said that her health deteriorated after her mother passed away. After she read Zhuan Falun, the main book of Falun Gong, her outlook on life changed, and her health improved. She expressed her gratitude and said, “I came to the parade so that I could let more people know about Falun Dafa.”

Tran’s son Jaydo works for an IT company. Two years after Tran began practicing, impressed by the positive changes he observed in his mother, Jaydo also began practicing. He said, “Falun Dafa changed my worldview. I’ve become more tolerant of people. My wife is also a practitioner. She used to worry a lot. Now she is calm and stable.”

His wife Pixi agreed and said, “From my own experience I know that what Master says is real. I am now happier and healthier, and can calmly deal with problems in life.” 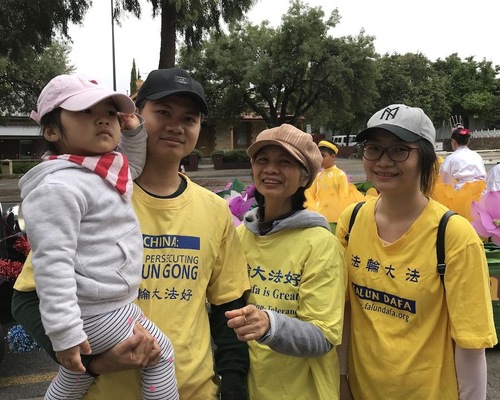 Tran from Vietnam and her family all practice Falun Gong.