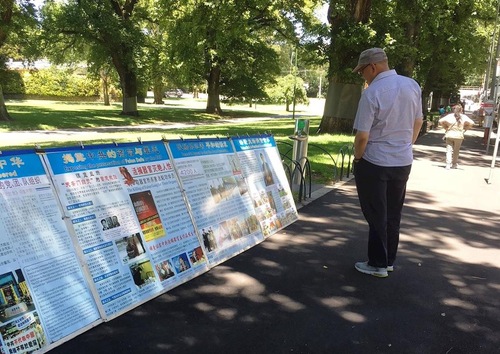 Fitzroy Gardens, located on the edge of the Melbourne Central Business District, is a major tourist attraction renowned for its Victorian era landscaped gardens. During the Christmas holiday season, Fitzroy Gardens is filled with tourists.

For the past 18 years, Falun Gong practitioners have come to this popular location to raise awareness about the persecution in China and persuade Chinese tourists to quit the Chinese Communist Party (CCP).

For many visitors from China, this might be their first opportunity to learn about Falun Gong free of the negative propaganda and slander of the CCP.

After reading the information and talking with practitioners, many tourists from China have chosen to quit the CCP.

“This Is Why We Travel Overseas”

A Chinese father and his son stopped at a poster and carefully read it. The father took a pamphlet and told a practitioner that his friends who’ve traveled outside of China had told him about the Falun Gong booths at tourist sites.

Their friends said that there was a great deal of information overseas that was not available in China. “This is why we travel overseas,” explained the father.

He said he was aware of the health benefits of Falun Gong, but did not understand why there were so many negative media reports in China. A practitioner explained how the CCP uses fabricated lies and violence to suppress the practice.

The practitioner said, “Officials detain practitioners and torture them, attempting to force them to give up their belief. Think about it, if a person lives by the principles of Truthfulness-Compassion-Forbearance and you try to stop them, aren’t you doing a bad thing?”

After the man learned how practitioners are persecuted for their belief, including being imprisoned, tortured, forced to do slave labor, and having their organs removed, the father and son were in tears. The father said, “I did not know the Party was so vicious. We have all been brainwashed by the Party’s media in China. How can they remove organs from living practitioners and then sell their organs!”

Before they left, the father and son both withdrew from the CCP organisations they had joined. Taking a copy of all the informational materials, the father encouraged the practitioners to keep up their efforts to tell people about the persecution. 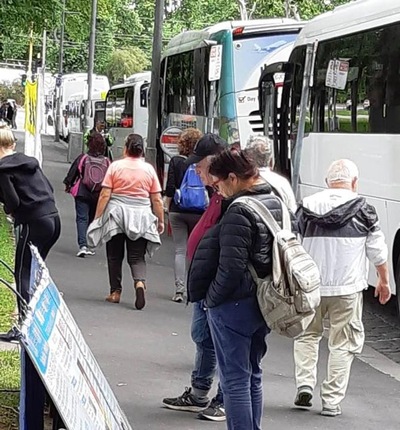 One man in his 40s stopped by with his tourist group. He read the posters, but turned down the information when a practitioner offered it. He said that nearly 20 years have passed since the persecution was started by former communist party leader Jiang Zemin, and he didn’t think the CCP was that bad.

A practitioner reminded him of the various political campaigns in China over the past several decades, from the persecution of intellectuals, the Cultural Revolution, the suppression of the student movement in 1989, to the ongoing mistreatment of Falun Gong practitioners.

The practitioner explained that the CCP has suppressed one group after another and its only agenda was to protect its own interests, with complete disregard for people’s lives.

The man became quiet. After a while he said that the Party may become better in the future. The practitioner continued talking with him, explaining how the CCP has undermined China’s traditional culture and is actively destroying moral values. The practitioner pointed out that, were it to continue, not only China, but the entire world would deteriorate.

The man nodded in agreement. He said he was a CCP member and wished to quit the Party.