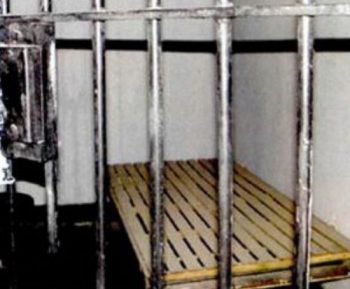 Falun Gong practitioner Mr. Wang Jinbo suffered mental and physical injuries in the Jilin Province Prison. He was released on October 4, 2018, after serving five years and four months. He is still in poor health.

People who knew Mr. Wang could hardly recognise him when he returned home. His face was dark and his hair was almost totally grey. There are blotches that appear to be vitiligo all over his body, including a 5-cm patch on his forehead, a 3-cm patch on his left cheek, and many 10-cm-long areas on his body.

His thinking wasn’t clear and his eyesight was subpar. He also had difficulty speaking and exhibited severe memory loss. His back was hunched and his legs were bowed. He now often sits on the bed for hours without saying a word, sleeps very little, and has been heard talking nonsense in his sleep.

Even when his son, whom he hadn’t seen for many years, visited him, Mr. Wang responded very slowly and didn’t talk much.

According to his family, Mr. Wang was tortured physically and mentally when he was in prison. Most of the time, he had to sit on his cot from 5 a.m. to 9 p.m. every day. He was only allowed to go outside for very short periods of time.

He was even placed in solitary confinement for nearly two months, and there were times when he wasn’t even allowed to use the restroom. He also was subjected to numerous physical penalties and was verbally abused by the guards.

Mr. Wang was a manager of the mortgage department of the Construction Bank of Yitong County, Jilin Province. He started practicing Falun Gong in 1999 and was recognised for his diligence on the job. The bank rewarded him many times, and the provincial bank gave him awards for his professional articles. He refused to accept bribes from his clients, who praised him highly.

After the Chinese Communist Party (CCP) started persecuting Falun Gong on July 20, 1999, he was threatened and deceived by the police and CCP officials, tortured and otherwise mistreated.

He was fired after he was sent to a forced labor camp in 2002. After he was released on December 14, 2004, he often returned to the bank to ask for his job back, but they always turned him down. He later found an accounting job at a high school cafeteria.

Mr. Wang was arrested again by domestic security officers Yu Wenrong and Li Guoqing from Songyuan City Police Department on June 5, 2013. He was secretly tried in the Jiang District Court on August 6, 2013. His family asked the court why they weren’t notified of the trial.

Mr. Wang was illegally sentenced to six years in prison and sent to Jilin Province Prison in September 2013. When his family visited the prison on May 30, 2014, they were told that Mr. Wang was in solitary confinement and was not allowed to see them.

His family tried to see Mr. Wang three times during the following two weeks but were never given permission. The last time a guard claimed that Mr. Wang was still in solitary was on June 17, 2014.