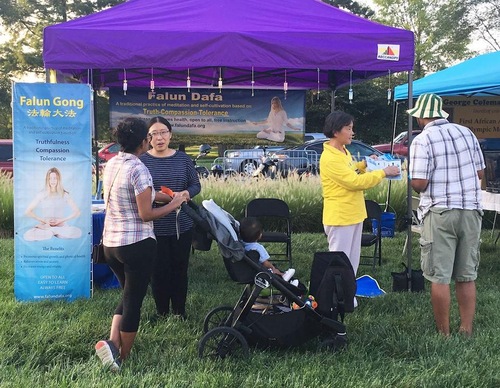 The practitioners set up an information booth, demonstrated the Falun Gong exercises, and distributed information materials. Many people expressed interest in learning Falun Gong. Some who learned the exercises said they felt a strong energy flow.

A hospital employee talked to a practitioner for a long time. She had been looking for a meditation exercise and was happy to discover Falun Gong’s effect on health. She planned to introduce it to her patients and take her sister to a group exercise site to learn Falun Gong.

A couple told practitioners that they knew two Chinese exchange students who looked afraid when the couple had mentioned Falun Gong to them. Practitioners explained to them how the Chinese Communist Party (CCP) slanders Falun Gong and incites hatred against practitioners using propaganda. 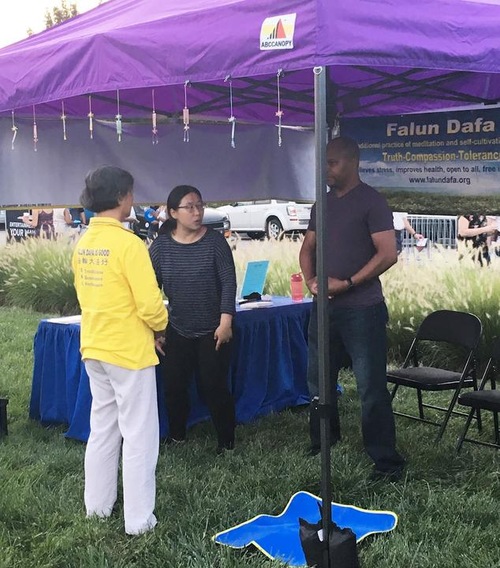 A man watched the exercise demonstration for a long while. He told a practitioner that he had heard about the Chinese communist regime’s killing of Falun Gong practitioners for organs.

However, he questioned why the regime has relatively relaxed policies on certain religions while persecuting Falun Gong heavily. He suggested that some religious groups had compromised their freedom under the communist regime’s pressure, and some are simply operating under the disguise of religion.

A practitioner explained the Chinese Communist Party’s destruction of traditional Chinese values and its fear of the popularity of a belief in the Falun Gong principles Truthfulness-Compassion-Forbearance.

Many visitors said they were happy to see the Falun Gong booth. Some wanted to join an exercise group later, and some learned the exercises on the spot.