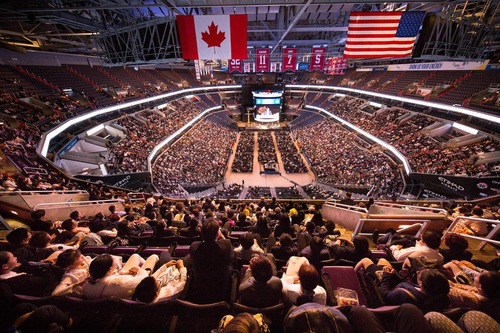 Master Li Hongzhi arrived at the conference at 2:00 p.m., and lectured for one hour and 45 minutes, including a question and answer session. Attendees applauded warmly to welcome the revered Master. 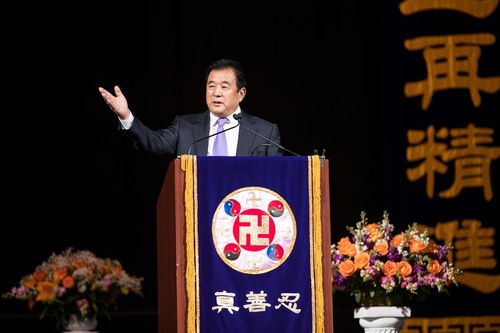 The conference hall stage was decorated with flowers. Around the arena were electronic banners that read “Falun Dafa is good” and “Truthfulness-Compassion-Forbearance.”

Banners were hung on each side of the stage, which displayed Master Li’s poems:

Advance together, ever diligent,

To a glorious future.”

“Pause for a moment of self-reflection,

and increase your righteous thoughts

and progress with renewed diligence.”

“Truthfulness-Compassion-Forbearance is what I have been looking for.”

Twenty-eight year old Paul Greaney obtained a Falun Gong flyer four years ago in San Francisco’s Chinatown. When he saw the golden words “Truthfulness-Compassion-Forbearance” on the flyer, he knew that it was what he had been looking for.

He found the exercise instruction video and books online, and started the practice himself.

“I cannot say that I understood every word that Master said, but I believed every word. I knew Master Li had no selfish motivation. Everything he said was the truth, and was feasible,” Paul told the attendees, “I was very excited.”

Paul quit all his bad habits, and Master Li purified his body.

“I was like a new person,” he said, “I am very grateful to Master.”

Paul sees the significance of clarifying the truth and saving people, and he has actively joined fellow practitioners in a variety of projects.

“It is a serious matter to tell people the truth and what is going to happen,” he said. 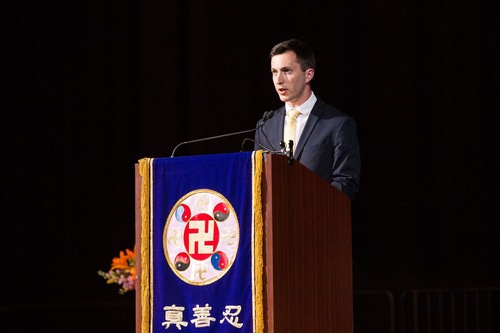 Falun Dafa practitioners shared their experiences to the conference in attendance.

Benjamin Maloney from New York used to be addicted to alcohol and drugs. In 2008, a few months after he was arrested for DWI, a cousin of his introduced Falun Dafa to him, and he started to read Zhuan Falun (the main book of Falun Gong).

Ben said that when he started following the principles of Truthfulness-Compassion-Forbearance, his life changed, and he never used drugs or alcohol again. His school grades dramatically improved, and he graduated at the top of his class from a prestigious liberal arts college. After graduating, he received an offer from a “Fortune Global 500” company.

Ben is grateful for Dafa and Master, who renewed his life and changed him from being a drunken and lost young soul into a useful adult who makes his parents and himself proud.

In his speech, Ben also talked about how he eliminated the attachment to self, broadened his heart, and started seeing things from multiple angles. He believes that it is a manifestation of great compassion if one can see things with a humble and open mind and try to understand other people’s opinions.

Lu Di from Boston started practicing in 2005. In 2015, she enlightened that she needed to take the responsibility seriously and clarify the truth to the public.

She started several projects which help her inform government officials and community leaders about what Falun Gong really is. She also initiated a long-term project, with help from fellow practitioners, to clarify the truth to the students and faculty at Harvard University.

She shared her experience of organising a rally on the Harvard campus, during which numerous media workers, scholars, businessmen, and tourists learned the facts about Falun Gong.

She also organised a movie screening to expose the state-sanctioned organ harvesting in China, which was attended by scholars, doctors, human right activists, and Chinese students.

“A solid and righteous belief in Master and the Fa is the key to success,” she said in her speech. She said she truly sensed the great power of the Fa.

“If you have enough courage to trust the Fa and carry out what you learn from the Fa, you will see the great power. This is also a process for a cultivator to improve,” she added. 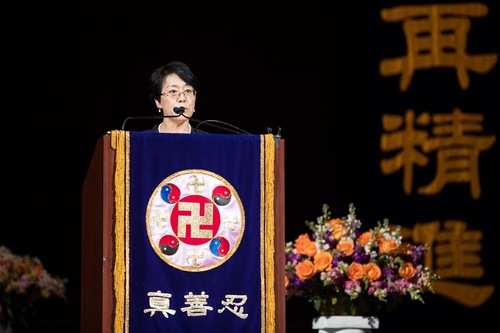 Falun Dafa practitioners shared their experiences to the conference in attendance.

Katherine Combes from Montana shared her experiences of clarifying the truth of Falun Gong to state senators and representatives. Katherine delivers Falun Gong materials to the lawmakers’ offices, and invites them to local Falun Gong events.

She also writes to the local newspaper, and holds free workshops to teach the exercises to interested people.

She recalled that people used to look at her in a weird way when they didn’t understand what Falun Gong was and why she does what she does. But the situation has changed, and people have now learned that Falun Gong is a great practice. Many people support her.

“It is the best reward for me,” she said.

Katherine said she hasn’t had any miraculous experiences, but in her heart she knows that she has made a pledge with Master Li: to be a diligent cultivator.

Because of this pledge, she has been able to cultivate diligently for many years. She thanked Master for helping her on her journey of cultivation.

“Master and all kinds of divines are helping us, as long as we cultivate solidly.”

Li Mengying from Taiwan tries to pass the message of Truthfulness-Compassion-Forbearance to children through animation TV shows.

“I had never done this before. To learn how to make great shows, I attended a lot of training courses, seminars, workshops, and conferences. I spent a lot of time watching cartoon shows. I recorded what the instructors said in class, and spent hours watching each lecture,” she said, “When I saw that my work was not as good as the professionals, I often cried.”

“It was very frustrating. I had to suffer in every class. It was the Fa that gave me courage and power to persist,” she said, “Fa gave me energy so that I could stand up after I fell every time.”

Her productions have since won 56 international awards at all kinds of movie festivals. Many reviewers do not see her work as TV shows for children, but instead believe her work influences the entire society and country.

An American movie maker invited her and her team to Hollywood, and issued them a prestigious award. The movie maker said, “This is an award for those who can change the world.”

Li Mengying said, “Maybe some practitioners do not dare to imagine playing the main character in the society. They don’t have the confidence. But if we have belief in the Fa, we are not fighting alone. We have the strongest backup in the universe, because Master and all kinds of divines are helping us, as long as we cultivate solidly.”

At the conference, Chen Huixia from Canada shared her experiences of eliminating sickness karma and overcoming a life-or-death test by studying the Fa, looking inward for her own attachments, and diligently clarifying the truth.

Liang Yan from Hong Kong shared her experiences of clarifying the truth as a media reporter, including how she gains trust from the public.

Liu Yuelong from Atlanta described his experiences of memorizing Zhuan Falun and how he eliminated all kinds of attachments during this process.

Chen Yingting from Taiwan shared her understanding of collaborating with other practitioners and removing the attachment to oneself.

Yang Xiuya from Taiwan shared her stories of clarifying the truth to Chinese people at tourist spots.

The conference concluded at 6:00 p.m.