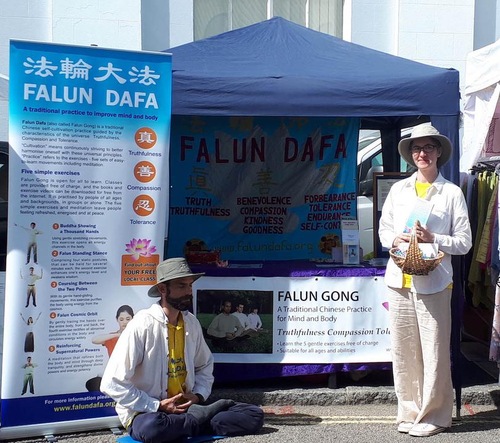 Falun Gong practitioners participated in the Golowan Festival, a musical and cultural celebration of midsummer, for the eleventh time in Penzance, a coastal city in Cornwall, UK, on June 23-24, 2018.

The practitioners set up a stand early in the morning, where they provided information about Falun Gong. They demonstrated the exercises, distributed Falun Gong flyers, and taught visitors how to fold paper lotus flowers.

The colorful Falun Gong banner caught the attention of many visitors. Seeing the practitioners doing the sitting meditation in all the commotion, many paused to watch and express their admiration.

One man said he felt a sense of happiness and true serenity. Some said they were looking for Falun Gong, while others said they came upon the practitioners by accident.

A lady who paused to read the Falun Gong poster told a practitioner about her previous encounter with the practice.

She had read a touching story on Facebook about a father and son who’d used drugs for many years. After they started practicing Falun Gong, their lives changed completely. Their account moved her and made her want to learn more about the practice.

She was delighted to see the Falun Gong banner and knew it was more than a coincidence.

She said she planned to learn Falun Gong and asked for contact information for a local group practice site.

Looking to Learn the Practice

Some of the visitors who came from east Cornwall and south Devon said they lived far away and would not be able to attend the free Falun Gong class in Morrab Gardens in Penzance.

A Falun Gong practitioner couple from west Devon, after hearing that some people wanted to learn Falun Gong, said they would organise a free class there.

One couple spoke with the practitioners on the first day and said they really wanted to learn Falun Gong. When they came back the next day, the man said that he could sense peace and energy around the practitioners that he had not felt anywhere else.