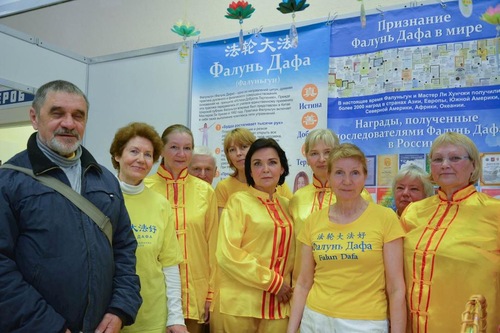 Falun Gong practitioners in St Petersburg were invited to participate in the local “Beauty and Fitness Expo” April 26-29, 2018.

The practitioners explained to those who stopped by their display that they could achieve physical and mental well being by cultivating themselves based on Truthfulness-Compassion-Forbearance. “True beauty comes from within,” as they said. They also raised awareness of the persecution of this ancient spiritual practice in its country of origin, China.

Many visitors were drawn in by the information on the display boards and stopped by to find out more. Those who heard about Falun Gong for the first time showed interest in how to improve their health through the practice. Many people were impressed by the peaceful exercise demonstration. 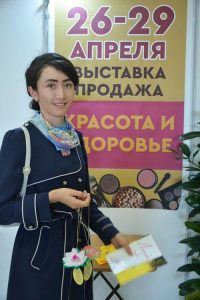 The lady named Ai from Kyrgyzstan watched the exercise demonstration and took note of a place to learn the exercises.

The practitioners were asked about their cultivation experiences and fielded many questions.

Vladimir told a practitioner that he has thought deeply about the meaning of life and studied philosophy. He condemned the persecution of Falun Gong practitioners by the Chinese Communist Party (CCP) in China.

Karina from Armenia has learned many cultivation ways and showed interest in the principles of Truthfulness-Compassion-Forbearance. She wrote down the website address and said she would find more about the practice on the internet. 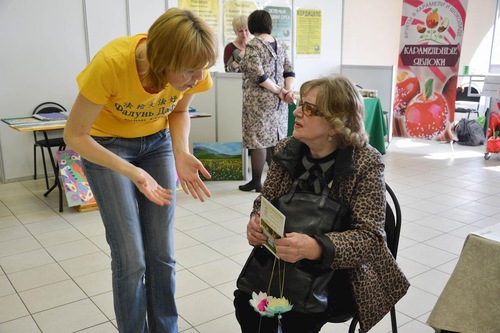 One woman said she felt a strong sense of compassion from the practitioners demonstrating the exercises and was reluctant to leave their booth.

He decided to return and tell the practitioners, “I understand now that the persecution is not just an act of the person in power. It is a battle between evil forces and compassion.”