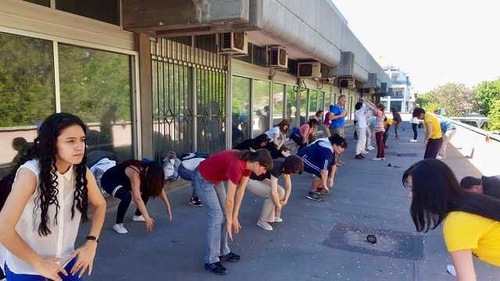 Falun Dafa practitioners once again took part in the Bulgarian Health Fest in April 2018, also called Zdravei Zdrave (Hello Health). The nationwide event was in its ninth consecutive year under the slogan “Healthy spirit in a healthy body.”

The health festival took place in the cities of Yambol, Plovdiv, and Blagoevgrad for three consecutive weekends.

On April 14-15, dozens attended the lecture “Returning to Our Original, Innate Being with Falun Dafa” that was held at the House of Youth in Yambol. The host discussed how conforming to the principles of Truthfulness-Compassion-Forbearance makes that possible, and he shared his personal experience as a Falun Dafa cultivator.

“By following these principles, one improves his character, constantly increases his spiritual level, and gradually returns to one’s true self.” A demonstration and explanation of the five Falun Dafa exercises were later held in the city park for the many who wanted to learn them. 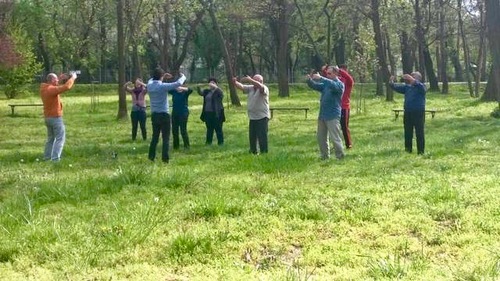 Visitors to the Bulgarian Health Fest learning the Falun Dafa exercises in natural surroundings at a local park.

Falun Dafa was met with no lesser interest in the city of Plovdiv, where the Zdravei Zdrave Health Fest took place on April 21-22 at the House of Tech and Science.

So many people wanted to learn the Falun Dafa exercises that the designated hall could only accommodate a quarter of them. The others learned the exercises on a huge, sunny terrace that was later provided by the event organisers.

On the second day of the festival, a practitioner gave a talk on Falun Dafa’s health and spiritual benefits before a full auditorium. She and other practitioners then answered questions about the nature of the cultivation system and the reasons behind its persecution by the communist regime in China.

Origami lotus flower workshops were held on both days. They attracted both children and adults, who commented on their purity and positive energy. Many visitors learned about the history of the “petals of peace” and took home this lovely symbol of hope. 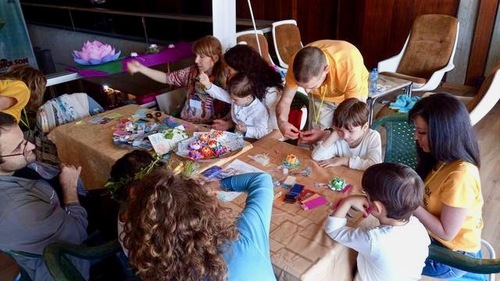 The making of origami lotus flowers at the workshop.

Guests were also given informational materials compiled from research studies on “Falun Dafa’s Effect on Health and Fitness” and “The Science Behind Falun Dafa.”

The origami workshops attracted much attention in the city of Blagoevgrad. Children were happy to draw the Chinese characters for Truthfulness-Compassion-Forbearance with watercolor and crayons. Dozens of festival-goers attended a presentation on the cultivation practice and tried out the exercises.