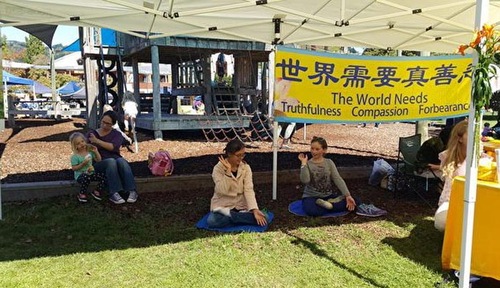 The traditional Harvest Festival featured a variety of activities including music, arts & crafts and entertainment, and vendors selling home-grown produce and organic foods as well as ethnic foods.

The practitioners had a booth where they distributed beautiful hand-made paper lotus flowers and taught interested festival-goers how to make them. They provided introductory brochures about Falun Gong to parents and students and also raised awareness about the persecution of Falun Gong in China, which has been ongoing for almost 19 years.

Many parents and students visited the Falun Gong booth and learned about the persecution of innocent practitioners who follow the principles of Truthfulness-Compassion-Forbearance.

Practitioners explained the meaning of the lotus flower in traditional Chinese culture, which likens the beautiful flowers that grow out of mud, to beauty and resilience in the face of hardship.

One parent remarked, “What a great idea! All the kids have lotus flowers now. They are so pretty! The story behind them is beautiful! I can understand and appreciate your work!”

A woman who sold children’s books at the booth next to the Falun Gong booth told practitioners, “I have read all your introductory materials. What you are doing is extraordinary! I’m very touched by your work.”

Practitioners also talked to the Chinese food vendors at the festival about Falun Gong, and helped them quit the Chinese Communist Party and/or its affiliated organisations.

A sixth-grader named Scarlet had encountered Falun Gong practitioners at three different activities. She took the initiative to help practitioners teach kids how to make paper lotus flowers and learned how to do the Falun Gong meditation.

A young woman from Russia was fascinated by Falun Gong. She learned the standing exercises and the sitting meditation at the festival. She described the Falun Gong booth as “having a very unique and attractive energy.”