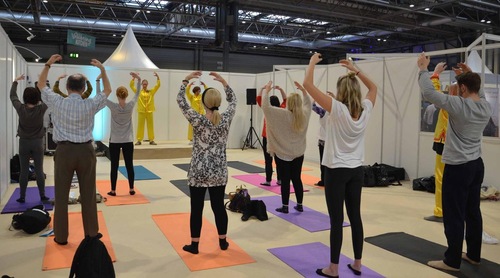 Practitioners of Falun Gong held a booth at Birmingham’s annual Mind Body Spirit Wellbeing Festival on November 3-5. They demonstrated the meditative exercises and gave out literature on the practice and the persecution of this peaceful group in China.

Heather and Emma attended the Falun Gong workshop to learn the exercises and about the principles behind the practice. Heather said that the movements of the exercises were simple, yet she could feel a very strong energy. “My mind became very focused and I felt very peaceful. The surroundings were very noisy, but it no longer bothered me,” Heather said.

Heather said that the world would be a better place if everyone practiced Falun Gong and followed its principles of Truthfulness-Compassion-Forbearance. “It will make us better people,” she said. 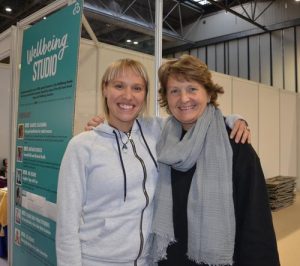 Tim watched the practitioners demonstrating the exercises and said, “When you see a group of people so peaceful, you feel their energy and your heart calms down. I want to learn Falun Gong. I will contact the practitioners in Cambridge.” 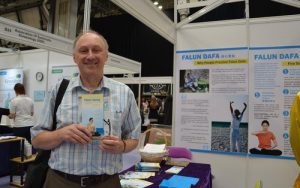 Tim said that just watching the exercise demo made him feel relaxed.

Rowena works at Birmingham University. She and Pauline were at the Wellbeing Festival last year and were intrigued by Falun Gong and stopped again this year to learn more.

“I was able to calm down and relax [during the demonstration],” said Rowena, “I feel very serene.” They planned to download the books from the Falun Gong website. 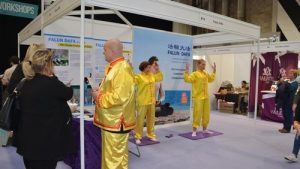