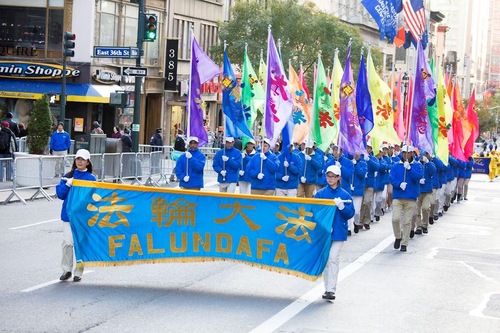 Falun Dafa practitioners in New York participated in Veterans Day Parade in Manhattan, New York on November 11, 2017. Their participation in this Veteran’s Day event, the largest in the nation, dates back to 2004.

Parade organizer Mr. Mark Otto said, “So this year, our grand marshal [Buzz Aldrin] was the astronaut who was actually on the moon. We have about 38,000 marchers, and we are the largest celebration of the veterans of the country every year.”

The parade moved along 5th Ave. from 26th to 53rd streets, lasting for four hours. The parade featured more than 350 entries from military units, civic and youth groups, businesses and high school bands from across the country and veterans of all eras. The organisers estimated turnout was over 500,000 spectators.

The Tian Guo Marching Band that led the Falun Dafa contingent was composed of more than 160 Falun Dafa practitioners. They performed the nation’s anthem “The Star-Spangled Banner,” and their original music pieces, including “Holy Songs” and “The Return in Triumph.”

“The band is cool,” said a couple watching the parade. “When the Tian Guo Marching Band was passing by, we looked at each other and said, ‘Wow!’” 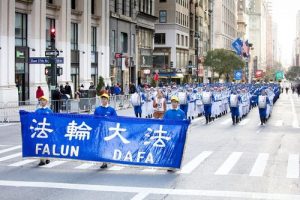 Ms. Yi Rong, head of the Falun Dafa Association said that Falun Dafa group has been invited to participate in the nation’s largest Veterans Day parade for years, bringing the wonderfulness of Falun Dafa and Truthfulness-Compassion-Forbearance to the mainstream society and people of all ethnic groups in the United States.

Through years of Falun Dafa practitioners’ efforts to raise awareness about the practice and the brutal persecution in China, more and more people have shown support.

She said that the participation and outstanding performances of the Falun Dafa group was, in itself, counteracting the Chinese communist regime’s lies.

Max Glodbas, a spectator said, “I can’t understand why they are being persecuted, they look so peaceful and wonderful.”

A few Chinese in front of the main stage watching the parade said, “Falun Dafa has a huge impact in the United States. They are peaceful and disciplined.”

Tom, another spectator, applauded and waved to the Falun Dafa contingent as it passed by. He said, “They are beautiful, spectacular! They bring peace to the world!” 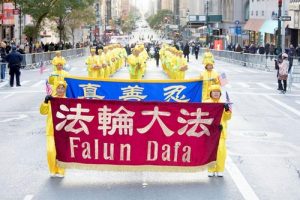