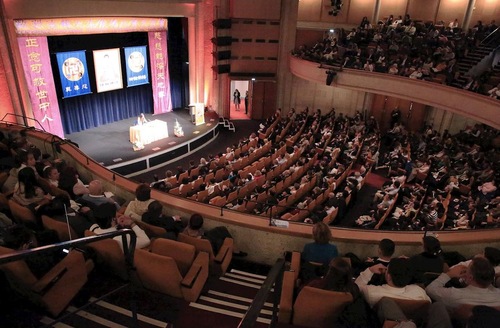 More than 1,300 practitioners from over 30 countries participated in the 2017 European Falun Dafa Experience-Sharing Conference at Versailles Convention Center in Paris on October 1, 2017. Simultaneous translation in eight languages was provided, including Chinese, English, French, German, Spanish, Russian, and Vietnamese.

Mr. Li Hongzhi, founder of Falun Dafa, sent a greeting to the conference, which was read to the attendees in four languages, Chinese, French, English, and German:

“Dafa disciples are the hope of humankind—the one and only hope. It is our mission to save lives, and a tremendous responsibility. Only by cultivating yourselves well can you do well what Dafa disciples must do. Fa conferences are good opportunities for you to inspire one another and improve together. I hope all of you will benefit from it and will cultivate yourselves even better.”

Nineteen practitioners shared the positive changes that Falun Dafa has brought them, and how they improved themselves when encountering conflicts. These practitioners were from France, Germany, United Kingdom, Switzerland, Sweden, Austria, Spain, Belgium, Montenegro, Italy, Romania, and Latvia.

David Rojas from Spain said he used to have a difficult time. Sciatica pain was causing him to be unable to lead a normal life. Out of frustration and despair, he turned to smoking and alcohol, and occasionally drugs. To solve these problems, he tried all kinds of treatments, including spiritual methods and meditation. “But they did not help me and the situation just got worse,” he recalled.

“About four years ago, I found Falun Dafa on the internet. So I began to practice it. Surprisingly, these problems that had been bothering me were gone in two weeks,” he said. David said he subsequently became more open-minded, and his family relationships improved significantly.

“Falun Dafa has brought many positive changes on my mind and body,” he added. 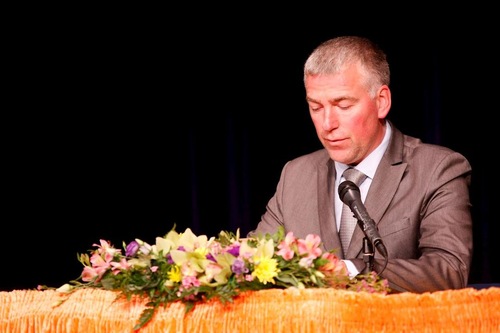 Practitioners shared their experiences from the practice.

Ms. Wang from Sweden attended Master Li’s nine-day lecture in 1994 at Jinan, Shandong Province. She also joined the lectures in Sweden in 1995. “Probably because I started to practice earlier, I became a coordinator and it gave me many opportunities to cultivate xinxing,” she said.

She is very active in organising events to tell people about Falun Dafa and validate the Fa. But with so many things to do, Ms. Wang said that sometimes she became impatient, with a bad temper. “One day Master pulled me to the side and said to me that others and I are fellow practitioners. Some of them have cultivated better than me. Master told me to treat them well; otherwise, I would regret at a later time,” said Ms. Wang.

Those words struck hard, causing Ms. Wang to pay attention to her attitude when working with others. She said, “Through the years, whenever I became impatient, I remembered Master’s words and calmed down.”

Bakhtiar from Switzerland said that Falun Dafa taught her not to blame others when encountering conflicts. “During the Shen Yun promotion, it was very easy for me to find something that had not been done properly. If I considered others’ faults, either in cultivation practice or in the handling of the specific matter, I became trapped in it,” she shared.

On the other hand, when she acted according to Falun Dafa principles and looked within to improve herself, Bakhtiar realised she was able to find the problem’s root cause in a short time, or Master would give her a hint. “From this I learned the importance of looking inward. When I am able to do this, I can get along well with other practitioners. This is because I no longer judge others with sentimentality, whether I like or dislike that person,” she remarked. 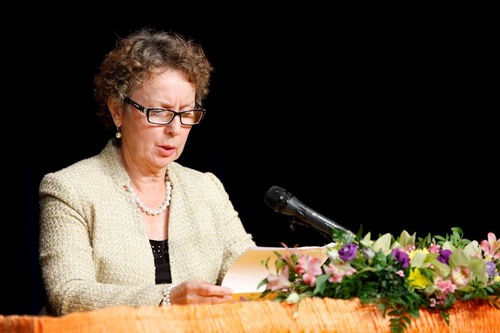 Practitioners all shared their positive experiences and how Falun Dafa improved their lives.

Robin, 18, and his mother first heard about Falun Dafa at a park in France three years ago. “In the first year, I spent lots of time reading the main teachings, Zhuan Falun. It taught me to look at things from a new angle,” he commented. In addition, he said he also learned that Dafa disciples should save people besides cultivating themselves.

Starting in 2016, with encouragement from his mother, Robin distributed information about Falun Dafa in his community. He felt embarrassed in the beginning, but he later gained more courage and was able to tell people face to face about Falun Dafa and the suppression in China. “This way, in about one year’s time, I distributed materials to all communities in three cities,” he said.

Many practitioners said that Master’s greeting, as well as sharing from other practitioners, had motivated them to do better from now on.

Pirjo is a nurse from Sweden. She said she used to have many human notions and could not prioritise things appropriately. She said, “Master often reminds us to cultivate solidly and we have be to serious about this. Starting from today, I will study the Fa and do the exercises every day.”

Volker Spielmann, a carpentry instructor from Germany, said that the conference helped him understand the urgency of cultivation. “We practitioners have missions to fulfill. To achieve that, we have to improve xinxing, let go of attachments, and have forbearance towards others.” He said today he sat with a practitioner that he does not like. But once Volker was willing to be tolerant of others, he found he could communicate well with the other practitioner, and the barrier between them was dissolved.

After the conference concluded at 6:00 p.m., Anatoliy Krlvenk, a photographer from Ukraine, said he found the gap in his cultivation. More specifically, he identified many attachments in himself. He said, “I will tell other Ukrainian practitioners who could not make it to the conference today that we have to look within, send forth righteous thoughts, and do the three things well to save people.”

(Visited 31 times, 1 visits today)
Posted in World News and tagged Falun Dafa Conference, France, paris
← Spectators at Niagara Falls Parade: “Falun Gong Should Not Be Suppressed Anywhere in the World”Shen Yun Symphony Orchestra in Taiwan: “A Treat for the Mind and the Soul” →