Australian Falun Gong practitioners held a rally in front of the Parliament Building in Canberra on Monday and Tuesday, September 11-12, 2017. Around ten victims of the persecution in China testified to the brutality of this human rights crisis by sharing their own experiences. Attendees called upon the Australian government to take action to help stop the persecution.

Meanwhile, inside the parliament building, MP Scott Buchholz hosted a forum that focused on the state-sanctioned organ harvesting from Falun Gong practitioners in China and the “organ tourism” to China. Several MPs from multiple political parties, along with experts from the fields of law and medicine, participated in the forum.

Rally of Falun Gong practitioners in front of Parliament Building on September 11-12, 2017.

Janet Rice, the Senator for Victoria, came to the rally on Tuesday and gave a supportive speech. She promised to speak for Falun Gong until the persecution ends. Rice has been a supporter of Falun Gong since she was a local lawmaker ten years ago.

“The issue of organ harvesting is something that has been raised regularly in the parliament, I am committed to paying attention to it, because it is unacceptable,” she said at the event on Tuesday, “We have moved motions in the Senate to make sure we do not have Australians having access to organs harvested from Chinese prisoners.”

Last November, Rice and Senator Eric Abetz proposed a bill that suggested banning travel to foreign countries to receive organs from unwilling donors. The bill also suggested a registration system for citizens who travel overseas for organ transplant surgeries. The bill was passed unanimously by the Senate. 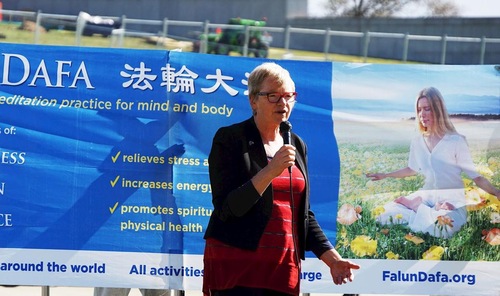 Janet Rice, the Senator for Victoria, speaks at the rally on Tuesday.

“We Could Do a Lot More on This Very Troubling Issue”

That same night, Senator Lee Rhiannon (Green Party) brought up the Falun Gong issue at a Senate session. She pointed out that the persecution of Falun Gong violates the human rights treaty. She called upon the government to do more to help stop it.

“I share the concerns of increasing numbers of people that state-sanctioned organ harvesting from non-consenting prisoners of conscience occurs in the People’s Republic of China,” Rhiannon said in her adjournment speech, “The United Nations Convention against Torture has called on China to conduct an independent investigation of claims that Falun Gong practitioners have been subjected to torture and used for organ transplants, and take measures, as appropriate, to ensure that those responsible for such abuses are prosecuted and punished. The 17-year-old persecution of the Falun Gong meditation practice by the Chinese Communist Party is a violation of international human rights treaties.”

Rhiannon suggested that the Australians can learn from the actions taken by the United States, such as the U.S. House Resolution 343 that condemns the forced organ harvesting. “I think that these recent developments in the United States, with regard to the passing of this 2016 motion, do give some pointers to what Australia could do and how we could do a lot more on this very troubling issue,” she concluded. 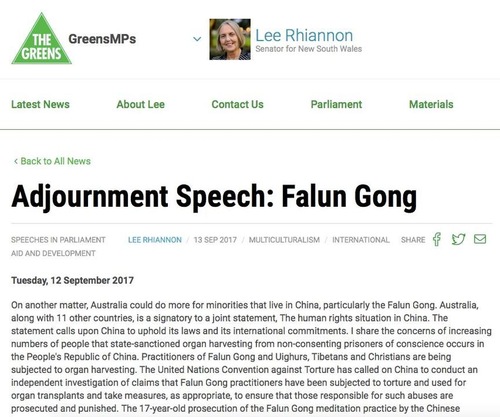 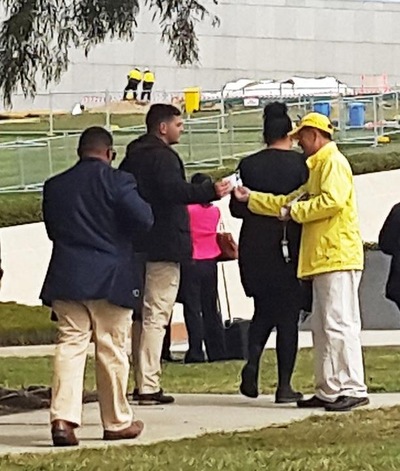