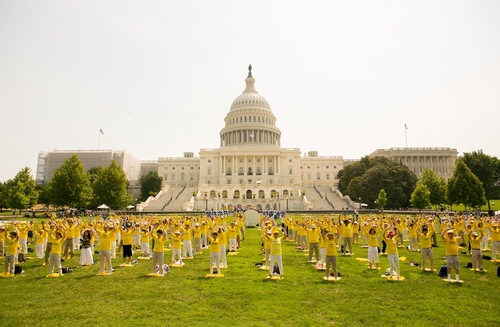 Several hundred Falun Gong practitioners from across the U.S. held a rally on Capitol Hill Thursday, calling for help in stopping the persecution of Falun Gong that began 18 years ago, on July 20, 1999.

Several members of Congress, the chairman of the U.S. Commission on International Religious Freedom, and several speakers from religious and human rights organisations expressed strong support in their remarks at the rally.

“There is good reason to believe that its practice of organ harvesting continues to this day.”

Referring to a report released by Freedom House earlier this year, Representative Ileana Ros-Lehtinen (R-Fla.) said, “Falun Gong practitioners are subject to widespread surveillance, arbitrary detention, imprisonment, and torture, and they are at a high risk of extrajudicial execution. And despite China’s best efforts to deny or whitewash the truth, there is good reason to believe that its practice of organ harvesting continues to this day.”

Ms. Ros-Lehtinen referred to House Resolution 343, in which the House of Representatives expressed its concern about the “persistent and credible reports of systematic, state-sanctioned organ harvesting from nonconsenting prisoners of conscience in the People’s Republic of China.”

The resolution, which Ros-Lehtinen co-sponsored, was passed unanimously in June 2016. At the rally, she called for an immediate end to the persecution of Falun Gong and the “ghoulish” practice of forced organ harvesting by the Chinese communist regime. 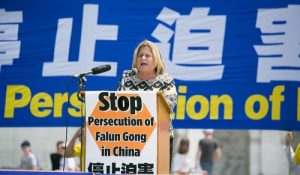 Rep. Dana Rohrabacher (R-Calif.) said that the Falun Gong practitioners in the audience and those residing in communist China are owed a special thanks. “Falun Gong saves the world from evil forces,” he said, adding that China and the Chinese people are under the control of a “clique of gangsters” who repress its people and threaten the world.

He said that the Falun Gong response “reminds us” of the nefarious intentions of the regime, which many people in the United States don’t care about or understand. “The good people of America stand with you. We will win this fight for humanity and make it a better world.” 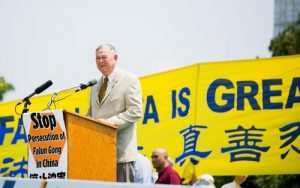 Rep. Donald M. Payne (D-N.J.) was especially disturbed by efforts by the Chinese authorities to “transform” Falun Gong practitioners through forced religious conversion. He said, “…efforts to force religious conversion have culminated in thousands of Falun Gong practitioners being held in prisons, detention centers, and forced labor camps, under deplorable conditions, simply for their beliefs.”

He expressed that governments should not dictate a person’s belief or faith. “It is incomprehensible and unacceptable for people to be treated in such a cruel, inhumane, and degrading manner.” 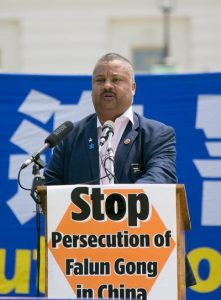 Rep. Keith Rothfus (R-Pa.), who is well-acquainted with Falun Gong practitioners in the Philadelphia area, admired Falun Gong for practicing nonviolence throughout the persecution.

Rothfus noted that those who practice Falun Gong sincerely embrace its three principles—Truthfulness, Compassion, and Forbearance, saying, “The people that I have met at this event and over the years truly embody these traits, especially regarding their response to the human rights violations in China.” 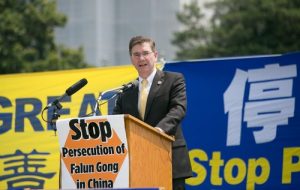 Rachel Wagley, who spoke on behalf of Rep. Ann Wagner (R-Mo.), said, “Congress and the administration must work to pressure China to end this horrific persecution.” Wagner wants to see laws enacted that curb the practice of organ tourism. She said that American medical facilities need to exercise caution in admitting doctors from China who apply for U.S. exchange programs. 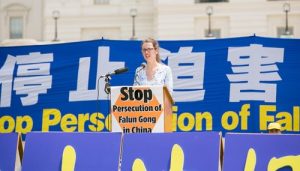 Bring the Perpetrators to Justice

Dr. Daniel Mark, chairman of the U.S. Commission on International Religious Freedom (USCIRF), said that every year since the creation of his commission it has recommended that the State Department designate China as a “Country of Particular Concern,” or CPC, meaning that China is one of the worst violators of religious freedom in the world. Mark noted that USCIRF is unlike any other government agency in that it focuses exclusively on freedom of religion or belief.

He said, “The World Organization to Investigate the Persecution of Falun Gong has compiled a list of more than 76,000 perpetrators of abuses against Falun Gong practitioners. Many of these are Chinese government officials or are affiliated with the government.”

He thanked the Congress for offering “tools to go after people who commit the kinds of abuses that the Falun Gong have suffered in China.”

He cited the Global Magnitsky Human Rights Accountability Act, which empowers the U.S. government to target individual officials, not just whole governments, who abuse religious freedom, as an example.

He said, “We want to make it harder for people to hide the persecution, and we want there to be a price for their abuses.” 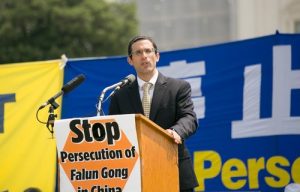 Robert Herman, vice-president of Freedom House, underscored the importance of religious freedom, especially for the United States, “Religious liberty is in the American DNA. It is part of our heritage. Religious liberty is a pillar of our democratic system.

“The Falun Gong story in China is not just one of victims and survivors of horrific persecution. It is also a story of unshakeable faith, of perseverance and resilience. We may also be seeing the impact of practitioners’ courage as new opportunities are emerging to push back against government repression targeting Falun Gong.”

Mr. Herman also believes that the U.S. government should use the Global Magnitsky Act as a tool to hold the perpetrators accountable. 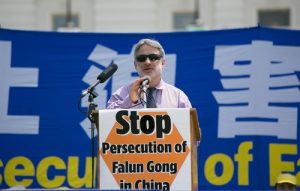 David Cleveland, senior lawyer for Catholic Charities of Washington, was appalled at China’s using Falun Gong practitioners as a “living donor bank” in providing organs on demand. He said that U.S. medical schools should stop training doctors from China in organ transplantation. He also said that the District of Columbia should rename the street in front of the Chinese Embassy “Falun Gong Plaza.” 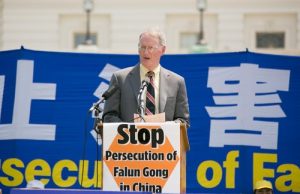 Urge the Trump Administration to Help

He urged the Trump administration to bring up the Falun Gong issue when dealing with the Chinese government.

Faith McDonnell, director of religious liberty programs at The Institute on Religion & Democracy

Faith McDonnell, director of religious liberty programs at The Institute on Religion & Democracy, expressed admiration for the resilience of Falun Gong practitioners. She quoted the saying, “I survived the fire because the fire inside me burned brighter than the fire around me.” “Falun Gong practitioners survived the fire of communist oppression and brutality because of the fire inside them,” she said. McDonnell has spoken at the annual rally for 12 years.

Dan Fefferman, president of the International Coalition for Religious Freedom, said, “I call on President Trump to use his influence to stop this repression of Falun Gong! Mr. Trump, speak to your new Chinese friends about the rights of Falun Gong.” 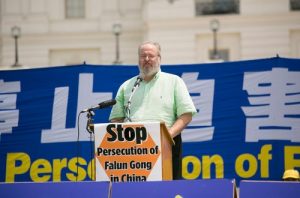 Dan Fefferman, president of the International Coalition for Religious Freedom.

Dr. Linda Lagemann from the Citizens Commission on Human Rights said some Chinese psychiatrists are guilty of “inventing mental disorders to justify the incarceration of Falun Gong members.” An example that gives away their true intentions is the invented disorder of “delusions of reform.”

She said, “[Falun Gong practitioners] are forcibly injected with psychotropic drugs, receive massive amounts of electroshock through acupuncture needles, endure forced sleep deprivation, and are tied up for long periods of time.” 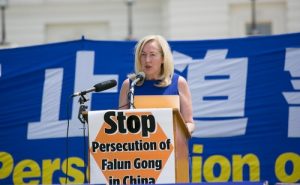 Dr. Linda Lagemann from the Citizens Commission on Human Rights.

Lagemann said that the International Criminal Court should get involved, because “these are unconscionable atrocities and require immediate action.” She noted that the ICC can prosecute the psychiatrists and officials for crimes against humanity.