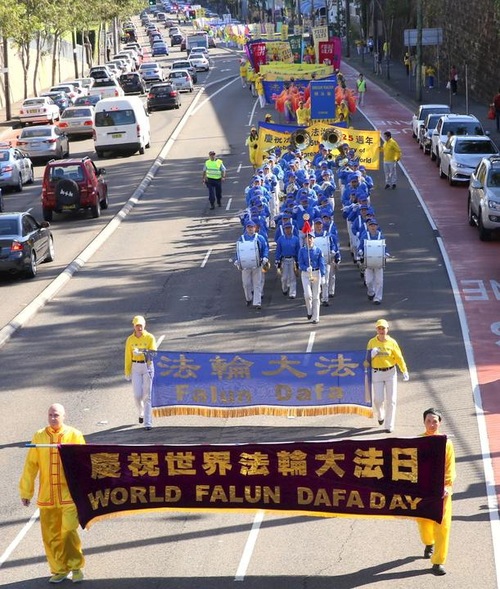 They also raise awareness about the Chinese Communist Party’s (CCP) persecution of Falun Gong in China and call for an end to the 18-year atrocity.

In this report, we cover celebrations in Sydney and Melbourne, Australia, and Auckland, New Zealand.

Group photo of practitioners who participated in the World Falun Dafa Day event in Sydney.

Several hundred Falun Gong practitioners held a group exercise practice in downtown Sydney and a march and rally to celebrate World Falun Dafa Day on May 6, 2017.

Many passers-by paused to watch the events. 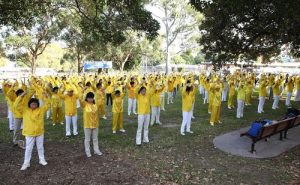 Falun Gong practitioners do the exercises together in Camperdown Park, Sydney, Australia.

The practitioners held a march in the afternoon. They started from the park, passed the Chinese Consulate, traveled down Parramatta Street, the University of Sydney, the Broadway business area, and finally ended at Belmore Park. Many people watched the march along the route. 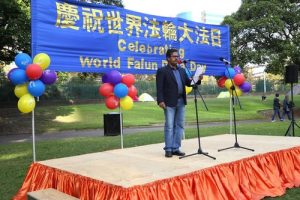 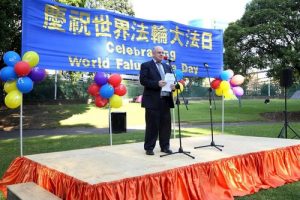 Andrew Wilson, former city council member for the City of Parramatta, participates in the rally to express his support for Falun Gong. 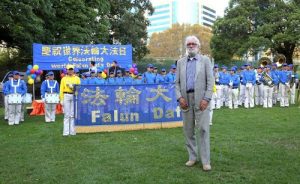 Elaine Vallance Featherstone, 85, is a former Australian ballet dancer. She has practiced Falun Gong since 1998. A spinal illness disappeared one month after she began practicing and she recovered marvelously from a fractured knee sustained in a severe car accident in 1999. She has been a local coordinator for many years and regularly takes part in activities to introduce Falun Gong to the public and raise awareness of the ongoing persecution in China.

Left: Elaine Vallance Featherstone (in fuchsia blouse) with practitioners in Washington DC in 2001. Right: Elaine (middle) practices the sitting meditation in a park.

Gary Kearns’ many illnesses, including skin cancer, disappeared after he began practicing Falun Gong. He gets up at 3:30 a.m. to do the exercises and study the Fa. Garry feels energized by the practice. 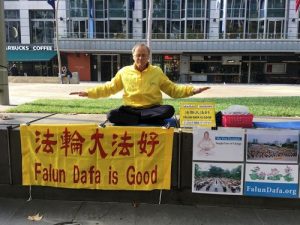 Practitioner Garry Kearns raises awareness about the CCP’s persecution in a downtown area every week. 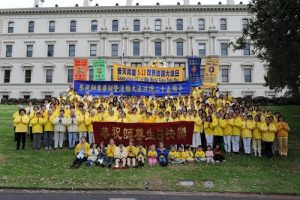 Group photo in Fitzroy Garden, Melbourne on May 6. 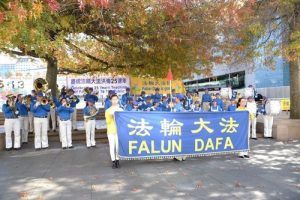 The Tian Guo Marching Band performs on May 6 in Auckland.

The Tian Guo Marching Band and waist drum team drew the attention of many residents, with many people taking photos of the event. 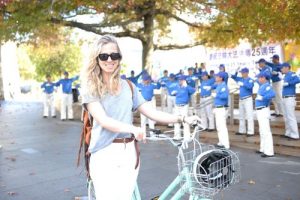 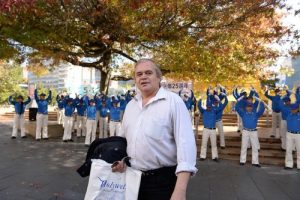 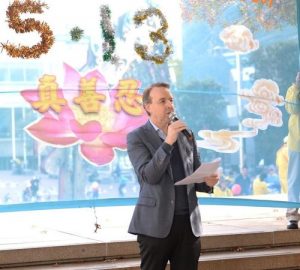