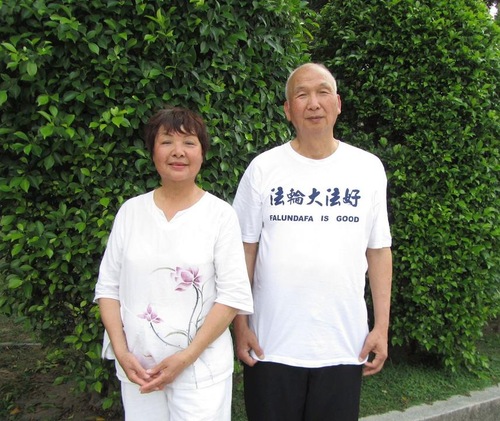 Chen Cheng-kun, who is in the food and clothing import/export business, was a regular visitor to a hospital emergency room due to a heart problem.

From his 30s, he often had difficulty breathing and congestion in his chest. He was taken to the emergency room when his heart started to beat irregularly and he felt as if he was suffocating. However, doctors could not find the cause.

He was once advised to see a heart specialist in Taipei. After the cardiologist carried out a battery of tests, he told Chen his heart was fine and recommended that he see a psychiatrist.

Feeling humiliated, Chen decided not to see any more doctors.

Desperate and upset, he sought answers in Buddhism, Taoism, and all sorts of qigong, but all in vain.

Chen and his wife Liu Mei went to visit a friend in their hometown in April 2001. Chen, who had not seen his friend for almost a year, was surprised to see how healthy he looked. His friend explained, “I am practicing Falun Gong.” He told Chen and his wife about the self-cultivation practice and gave them a copy of Zhuan Falun, the main book of Falun Gong.

Chen read the entire book in just a few days and got the address of a group exercise site nearby. He told his wife, “There are five exercises. I will go learn more about it. If it is good, we can practice it together.”

Chen went to the practice site early the next morning and watched the Falun Gong practitioners do the exercises together. He spoke with them and decided to learn Falun Gong. The practitioners held a free nine-day teaching session for Chen, his wife, and several others.

Chen recalled, “We started practicing Falun Gong on April 16, 2001. We have done the exercises every day and been happy and fulfilled ever since. Falun Gong is really good. More people should practice it. We have hosted free nine-day teaching sessions at our home since the end of May 2001. That year, my daughter started practicing Falun Gong in July. My son did the same in September. Now, my daughter-in-law, grandson, and granddaughter all practice it.” 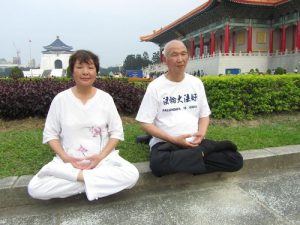 Chen Cheng-kun and his wife Liu Mei do the fifth Falun Gong exercise.

Healthier Than in Youth

Chen and his wife did the exercises and studied the books every day. About six months later, Chen noticed that his heart problem of more then 20 years was gone.

He started practicing Falun Gong in his 50s and has not seen a doctor since. He is now in his 70s and is healthier and more open-minded than when he was a young man.

Chen said, “Zhuan Falun is easy to understand—its principles are simple. But its implications are profound and marvelous. The more you read, the more profound it is. Problems that had puzzled me for years were solved when I read the book. My mind is content, and my body is healthy.” 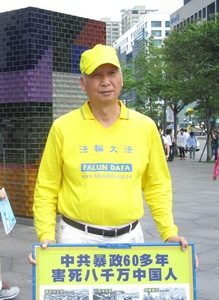 Chen’s poster says, “The Chinese communist regime has killed more than 80 million people in its 60 years in power” at a tourist destination to tell Chinese tourists about the persecution of Falun Gong and other crimes committed by the Communist Party.

Liu Mei had a frozen shoulder before learning Falun Gong. Her left shoulder was so painful that she could not raise her arm. She had tried Western and traditional Chinese medicine, but to no avail.

When she did the second Falun Gong exercise, she felt a drilling sensation in her left shoulder joint. It hurt less the longer she practiced, and it was completely well half a year later. She was often dizzy due to an inner ear imbalance before practicing Falun Gong. It, too, disappeared without her noticing it.

Liu said she lives by the Falun Dafa principles of Truthfulness-Compassion-Forbearance every day. She said with tears in her eyes, “We are so happy to be able to practice Dafa. We are healthy and happy. We have boundless appreciation for what Master has taught us.”