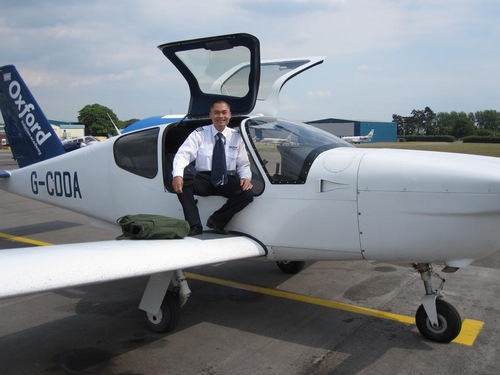 Many people have asked Captain Nguyễn Tuấn Dũng, a Vietnamese pilot with 14,000 flight hours, why he left a high-paying job in the Middle East for a position with a Taiwanese airline. The answer is that he wanted to learn Chinese so that he can read the Chinese version of Zhuan Falun the main book of Falun Gong, a traditional Chinese spiritual discipline based on the principles of Truthfulness-Compassion-Forbearance.

Captain Nguyễn, 44, has been a pilot for 22 years, with expertise in flying Airbus A320 aircraft. He has trained in Australia and France and is fluent in Vietnamese, English, Russian, and French.

Taking Up the Practice of Falun Gong

As a pilot, Captain Nguyễn has had a lot of opportunities to visit many different countries and to experience different cultures. Seeing so many people afflicted with sadness and suffering, he found himself often wondering about the purpose of life, why there is so much pain in the world, and why people are here on Earth.

He felt stressed, and sometimes he had trouble sleeping at night. Captain Nguyễn sought answers in religions, philosophy, and psychology, but none of these disciplines provided what he was looking for. He also practiced martial arts, but that didn’t help either. He was still confused by the basic questions.

Three years ago, Captain Nguyễn’s parents, both sports coaches, called him from Vietnam, excitedly telling him about their experiences of cultivating Falun Gong. They suggested that he give it a try. Captain Nguyễn was practicing a different qigong at the time, so he didn’t take his parents’ suggestion seriously.

Later, when he visited his parents on a vacation, his mother taught him the Falun Gong exercises. On his way back to work, he opened the book Zhuan Falun on the plane.

After one hour of reading, he felt that he’d found the answers to all the questions that had bothered him for such a long time. What a profound teaching, he thought. Once home, he spent 10 days reading all the Falun Gong books, and watched Master Li Hongzhi’s exercises instruction video. Then he called his parents: “I’ve found the profound spiritual teaching that I’ve been looking for!” He then officially started cultivating Falun Gong.

Soon after taking up the practice, Captain Nguyễn experienced a major improvement in health. He used to be exhausted after long distance flights, especially the “red-eye” (overnight) flights. After these flights, every bone in his body seemed to ache. The qigong exercises he tried before didn’t help, and the intense pain would last for days.

Now that he practices Falun Gong, he always does the exercises after the red-eye flights and before going to sleep each day. When he wakes up, he feels good, with no pain in his bones.

Pilots are required to have an eye examination every year after age 40. Captain Nguyễn has been surprised to discover that after he started practicing Falun Gong, his vision is even better than it was when he flew military aircraft in his twenties. 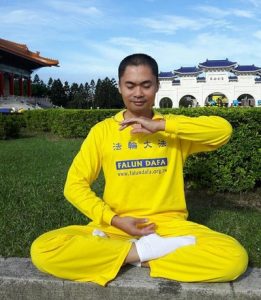 Captain Nguyễn at a Falun Gong activity in 2016 in Taiwan.

Following the Principle of Truthfulness-Compassion-Forbearance

Most importantly, Captain Nguyễn has changed in terms of how he interacts with other people.

“I try to follow Falun Gong’s teaching – Truthfulness-Compassion-Forbearance, and try to always consider others,” he explained.

Captain Nguyễn used to be hard on others. He is an excellent pilot and often won first place in professional races. Because of his skills, he developed an attitude of superiority and looked down on those who were not as good as him. When co-workers’ performance didn’t meet his expectations, he would get angry and criticise them. His mother often said that his words were sharper than a knife.

In cultivating Falun Gong, he now focuses on his own improvement. When others don’t do well, he often reminds himself to be tolerant and patient, and to try to see things from others’ perspective.

“When I have the urge to criticise others, I often ask myself—would this person be able to handle this? Everybody has different understandings of things. Should I measure others with my own criteria?” he asked. “When my heart changes, I find that the environment changes accordingly. Now, I get along with my friends and family.”

Captain Nguyễn is a happy person now. He is glad to share his experiences with co-workers, and those around him feel that he is a different and easy-going person. His co-workers enjoy working with him.

When asked what brought about the change, Captain Nguyễn often tells people it is Falun Gong’s teachings, and suggests that they give it a try.

Move to Taiwan to Read Zhuan Falun in Chinese

When he first started practicing, Captain Nguyễn worked for a Middle Eastern airline. He studied Zhuan Falun in English and Vietnamese. Yet he believed that reading the book in Chinese would help him come to a better understanding of the teachings, and he developed a wish to move to a Chinese-speaking environment.

An opportunity came soon after he first had that wish. Although the salary at the Taiwanese airline is only half of what he made in the Middle East, he feels that it’s worth it because he can take part in many different Falun Gong activities in Taiwan, and now he can read the Falun Gong books in Chinese.

It took Captain Nguyễn 10 months to learn all the Chinese words in Zhuan Falun. He is happy that he can now read the book in Chinese with local fellow practitioners. 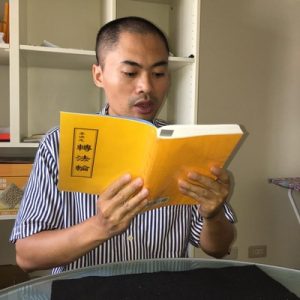 Besides reading the books and doing the exercises, Captain Nguyễn wants to tell the public, especially Chinese tourists, what Falun Gong really is. With his fellow practitioners, he often talks to Chinese tourists at the airport, telling them of his own experiences of practicing Falun Gong and about the brutal persecution in China.

Captain Nguyễn hopes to further improve his spoken Chinese so that he can do better in explaining the facts of Falun Gong to Chinese people and in this way help bring about an end to the persecution.