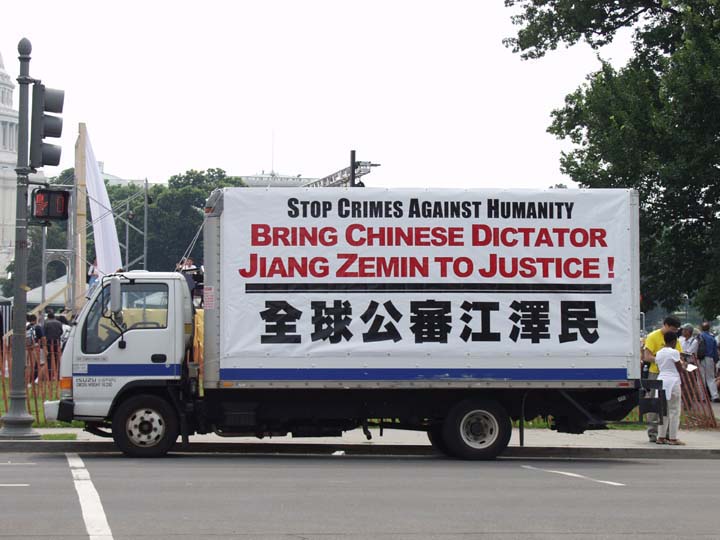 Jiang Zemin, the former Chinese dictator who launched the persecution against Falun Dafa, already has one foot in the grave.

Jiang being still alive gives hope to some Chinese, especially those who continue to follow the Chinese Communist Party (CCP), or toe the Party line, and participate in the persecution of Falun Dafa. Many of them may think that since Jiang is still alive and has not been punished, they too can get away with their crimes of persecution. They may wrongly believe that karmic retribution does not exist.

Those who practice Falun Dafa, however, believe that the period between now and the death of Jiang Zemin provides an opportunity to help people understand the nature of the CCP and to encourage the perpetrators to atone for their sins.

To suppress Falun Dafa, Jiang colluded with the Party, fabricated rumors to deceive the public, violently tortured practitioners and forcibly harvested organs from live practitioners for profit. His crimes have enraged many around the world.

As early as 2004, to avoid punishment in the future, Jiang Zemin made a list of conditions to reconcile with Falun Dafa practitioners. One of the conditions was to kill a number of police officers to atone for the crimes Jiang committed.

Following the principles of Truthfulness-Compassion-Forbearance, practitioners refused the “offer.”

However, Jiang continues to deceive people, and the number of people harmed by the persecution has also greatly increased. Those who murdered practitioners, or even those who believe the CCP’s propaganda and harbor hatred toward practitioners have breached heavenly laws as well. While many have seen the tragedies that befell the perpetrators, it is difficult for others to believe that retribution is occurring, unless it is witnessed.

Falun Dafa practitioners are doing everything they can to stop more misfortune from occurring.

The CCP is the root of all evil and the creator of disasters. Party members, from top levels to the bottom, live in anguish and are in panic mode. The law of retribution is encircling and annihilating the Communist regime.

Before Jiang dies, I hope people can learn about Falun Dafa and the persecution, and quit the CCP, once and for all, to avoid disaster.

Those who still allow themselves to follow the CCP might not see how Jiang will die, because Jiang’s death will signal the end of the Party.

(Visited 77 times, 1 visits today)
Posted in Insights and tagged Bring Jiang to justice, persecution of falun Gong
← Premiere of The Bleeding Edge Calls for End to Forced Organ Harvesting in ChinaPuerto Rico: “I Hope You Get So Many Petition Signatures That the World Runs Out of Paper!” →