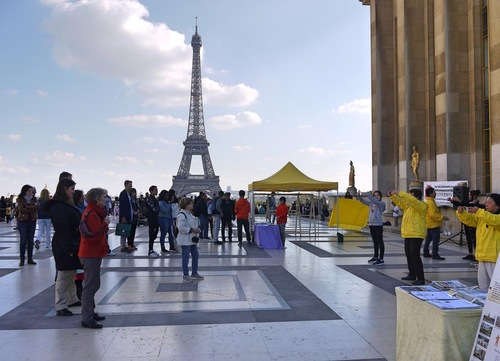 The United Nations General Assembly adopted the Universal Declaration of Human Rights in the Palais de Chaillot near the Eiffel Tower in Paris on December 10, 1948.

Almost 70 years later, Falun Gong practitioners in China are still being mistreated for their belief in the principles of Truthfulness-Compassion-Forbearance.

Practitioners in France went to Human Rights Square on October 9, 2016 to raise awareness of these atrocities still taking place in China. 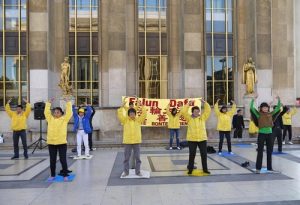 A New Type of Viciousness

Jean Bernard, a retired teacher, signed a petition together with his wife and their friends to support Falun Gong practitioners. “I am a teacher, so I know it is important for us to join together and respect humanity,” said Mr. Bernard.

Yvette, another passerby, called it “disgusting” to harvest organs from living Falun Gong practitioners in China. She said under no circumstances should the Chinese communist regime suppress people who peacefully practice their belief.

“I know many bad things have happened in China during the past several decades. Apparently, forced organ harvesting is another crime committed by the Chinese communist regime,” she continued. 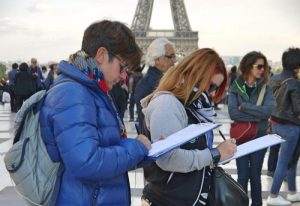 People sign petitions calling to end the persecution against Falun Gong in China.

“More People Need to Know This”

Gérôme Brooks works in research and development at a pharmaceutical company. He said human rights violations in China is rarely reported in major news media. “If someone only follows news from major television or radio stations, they might hardly know what is really going on in China.”

Reacting to forced organ harvesting from living Falun Gong practitioners in China, he said, “More people need to know this.”

Marie Beique, a visitor from Canada, was very interested in the Falun Gong meditation exercises. This was the first time she had heard about the suppression of Falun Gong in China, but she fully supports practitioners’ efforts. “You have to tell others what you have experienced through events like this,” she said. 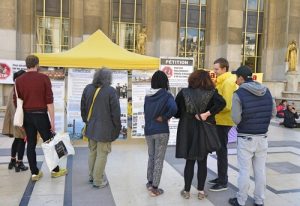 Passersby read posters to learn about Falun Gong and the persecution in China.