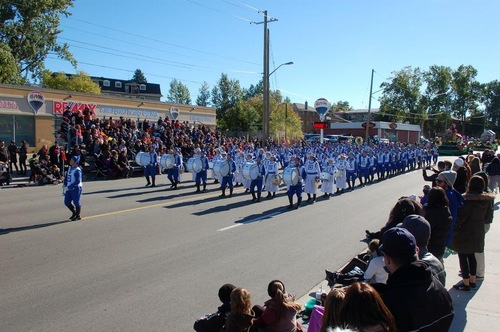 Canadian Falun Gong practitioners’ Tian Guo Marching Band was invited to perform at the 48th Thanksgiving parade in Kitchener-Waterloo. They were the only Chinese group among the 122 entries.

Seven hundred thousand people, live and via television, watched the parade, the highlight of “Canada’s Greatest Bavarian Festival” which is the second largest Oktoberfest in the world. 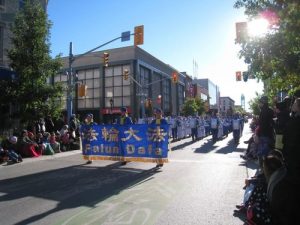 Falun Gong’s marching band dressed in traditional Chinese uniforms.Their performances were warmly welcomed by the organizers and audience at the Thanksgiving Parade.

“Their music is beautiful, and their costumes are bright. Very sunny!” said Samantha Appleby who came from Guelph for the event. “I like their hats too. Very cool.”

“They are very disciplined, too,” she added, noting that the band marched in place when the parade stopped moving.

Falun Gong’s marching band dressed in traditional Chinese uniforms.Their performances were warmly welcomed by the organizers and audience at the Thanksgiving Parade.

Along the parade, practitioners passed out flyers, introducing this ancient Chinese cultivation practice to the spectators, and asking for support to stop the persecution of Falun Gong in China. 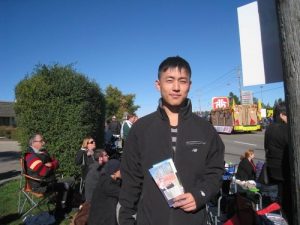 Many Chinese in the audience praised the Tian Guo Marching Band. Some Chinese spectators decided to take a stance against the regime’s crimes by withdrawing their memberships in the communist party and its affiliated organizations.

Some said that they had misunderstandings about Falun Gong before, but seeing its worldwide popularity and how different the group is from what the regime’s propaganda portrays, they were interested in learning more about the practice. 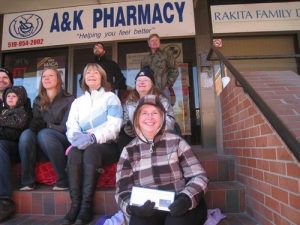 Karrie came all the way from New York for the parade. She was indignant when practitioners told her about the persecution. She said: “Nobody should be persecuted because of their belief. Everybody should have the freedom of belief.” 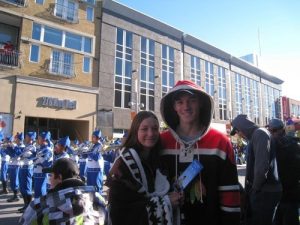 $Payton Cormier and James Roussel, two high school students, were outraged by the persecution. They said that the perpetrators should be brought to justice.