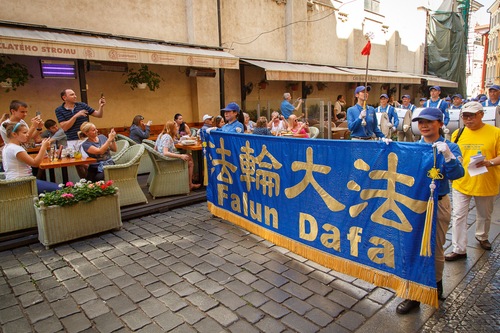 The European Tian Guo Marching Band visited the city of Prague on August 24, 2016, and assembled at Wenceslas Square before leading a parade through the historic city center. Thundering drumbeats that could be heard from a distance drew many spectators. 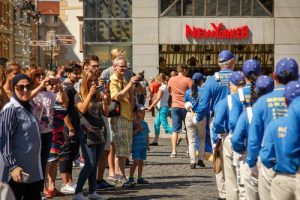 The parade passed many famous landmarks in Prague, such as the Old Town Square with its astronomical clock and the Charles Bridge, ending at the front gate of Prague’s Castle, the residence of the Czech president.

Many spectators didn’t understand how it was possible that a cruel persecution like this could be taking place in the 21st century. The practitioners who handed out informational materials were able to provide more details in Czech, English, and Chinese. Many passersby gave their support and signed a petition condemning the persecution in China.

An elderly man from Prague listened to a practitioner speak about the genocide in China. A practitioner asked him if he would sign the petition. “Of course,” the man answered without hesitation. “My mother was Jewish and survived several concentration camps. From the bottom of my heart, I hope these persecuted people in China will gain freedom, which everybody deserves. I’m absolutely against violence or any other injustice.” 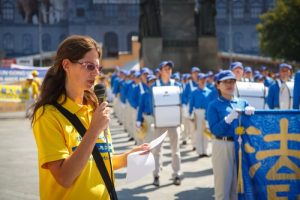 Falun Dafa practitioner speaking about the persecution of Falun Gong in China.

Another man who signed a petition said, “I heard about the persecution in China some time ago in an interview on the DVTV station. A man was describing the forms of torture being used. It sent shivers down my spine. Everybody should see that interview.” He called his wife over, and both of them signed the petition.

Practitioners from Czech and other countries gathered before the parade in front of the Chinese Embassy in Prague. They urged Chinese officials to free Mr. Wang Zhiwen. Mr. Wang was not allowed to leave China at the beginning of this month, after 15 years of illegal imprisonment and another 2 years of being monitored, all because he refuses to give up Falun Gong.

The band played several pieces, and local Czech practitioners read the letter in front of the Embassy. After an unsuccessful attempt to meet with the Chinese ambassador personally, they put the letter in the embassy’s post box.

Before stopping in Prague, the Tian Guo band visited several Hungarian cities and Vienna, Austria. The next stop on the tour is Kraków, and the last city they will visit on this tour is Warsaw.