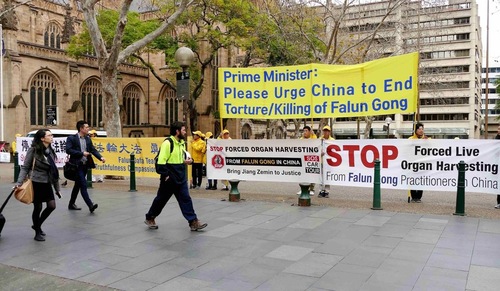 They also call upon the Australian government of various levels, along with local community members, and people from all walks of life, to show concern and work together to end the persecution.

Dr. Lucy Zhao, president of the Australian Dafa Association, said at the press conference that the car tour is a nation-wide event in Australia, aimed at helping the public and governments focus attention on the 17-year ongoing persecution of Falun Dafa practitioners in China, especially the Chinese Communist Party’s (CCP) forced organ harvesting atrocities which have been investigated by the international community in recent years. 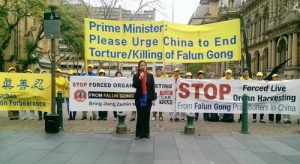 Press conference in front of Sydney Town Hall for the car tour, which kicked off on August 29, 2016, calling for the public’s attention to the persecution of Falun Dafa in China and help to end it.

Ms. Zeng, one of the event initiators, said that among the participants of the first group, the oldest is 90 years old and the youngest is 24 years old. Falun Dafa practitioners Wu Xiaohong and Wang Xiaofang recounted their experiences of being tortured, and related what they and their loved ones in China had gone through. Working staff at the Town Hall passed by and signed their petition to support Falun Dafa.

The tour’s first stop of the day was the City of Goulburn, where the practitioners were positively supported by local people. The area’s largest community newspaper conducted an interview on the spot. 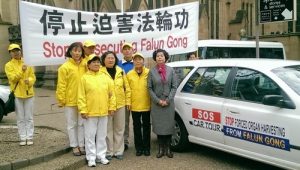 Members of the car tour.

Practitioners held a signature drive in the downtown area, and posted informational posters at stores and shops. In less than two hours, more than 60 citizens filled out postcards to be sent to Prime Minister Malcolm Turnbull, calling upon him to address the Chinese regime’s forced organ harvesting from prisoners of conscience.

Sisler, a teacher at the local Technical and Further Education (TAFE), wrote on the postcard, “Please stop China’s forced organ harvesting.” She asked for more than 20 more postcards, for other teachers in her school and her friends.

Among the messages to the prime minister are:

“Prime Minister, please do your best to help! Exposing this atrocity will be your legacy. You are a great leader. You can do it!”

“Please stop these horrible acts! Every one of us is saddened that this has been allowed to continue for so long.”