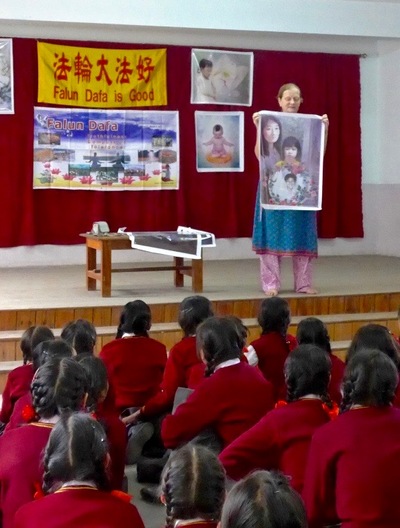 “May Falun Dafa continue to flourish and make the world a better place,” wrote a young Catholic nun in a letter to two Falun Dafa practitioners who presented several exercise instruction sessions to her 2,100 students in a remote area in Northeast India in July.

Bringing Information to the Hills of Northeast India

Two practitioners stayed in Northeast India for four weeks. The region is currently one of India’s states, but many locals do not identify as Indians. Indeed, their facial features, traditional cultures, and languages could probably be traced to the Mongolian race.

Although traditionally the people were fierce warriors, they are amiable by nature and highly hospitable to visitors. They consider the safety, security, and satisfaction of their guests as a matter of honor and prestige. The practitioners experienced their openness and hospitality in many ways.

Until now, there haven’t been any practitioners clarifying the truth about Falun Dafa to people in the region. Almost everyone accepted flyers given out by the practitioners; some would read them on the spot.

The practitioners not only reached out to many people on the streets but also met government officials, human rights lawyers, social activists, principals and vice-principals of colleges and schools, members of rotary clubs, and a medical doctor.

The day after their arrival in the capital, the practitioners held a press conference, which was attended by reporters from five local newspapers and one TV station. The results were encouraging. Three newspapers published articles about Falun Dafa—two in English and one in a local language.

Locals Easily Relate to the Persecution

The hilly land can be described as abundant with natural beauty. Lush green mountains and hills dot the landscape. During the summer months, the monsoon brings plenty of rain, oftentimes heavy. The winter months are dry and cool.

The locals have experienced a long and painful history of suppression by forces such as British colonialists, the Japanese military, and the Indian army. Thus, they can easily relate to and understand the suffering that Falun Gong practitioners have gone through over the past 17 years of persecution in China.

Although the local newspaper reports gave good accounts of what Falun Dafa is, they didn’t pick up anything about the ongoing persecution in mainland China. On a local bus, one of the practitioners met a young professional, who felt that this should be rectified. She wrote an engaging article for a local blog, which included facts about the severe human rights violations by the communist regime in China.

A well-known social activist and university lecturer, described by some as “very influential,” was ready to meet with the two practitioners. When she heard about the persecution of Falun Gong practitioners in China, she immediately asked why she didn’t hadn’t heard of it before.

She was very concerned about the persecution and about forced organ harvesting happening so close to her homeland. She even mentioned a case of someone going to China for a new organ. She eagerly accepted the offered books and materials, including the books Bloody Harvest, State Organs, and The Slaughter, as well as the documentary films “Free China” and “Hard to Believe.” She, like many others, signed the petition by Doctors Against Forced Organ Harvesting (DAFOH) to the United Nations.

Many who came to hear about the persecution immediately gave the practitioners contact information of other influential people in the area. This made it possible for the two practitioners to make good use of their limited time and materials. 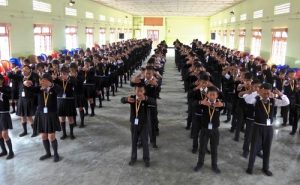 High school students in an Indian state near the Myanmar border learn the Falun Dafa exercises.

In order to talk about the persecution in a way that the children could easily understand, relate to, and empathize with, one of the practitioners brought banners of many paintings from The Art of Zhen-Shan-Ren International Exhibition, such as “Why?” “Homeless,” “Come Back Daddy,” “Killed For Their Belief,” “Unmovable,” and “Lotus Candles.”

In all three schools, the children’s reactions to the paintings impressed the practitioners. Even if some students were at times slightly restless during the exercises—due to heat, overcrowded space, no electricity for the microphone, or hunger before the lunch break—as soon as the practitioners started talking about the suffering and the injustice in China, the students became very attentive. Some even had tears in their eyes. 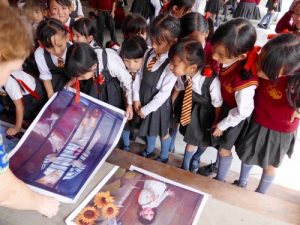 Through paintings from The Art of Zhen-Shan-Ren International Exhibition, young children in the Northeast of India learn about the injustice happening to children in China.

When the practitioners came back a week later to present Falun Dafa to more students at the same public school, they were greeted with students smiling and saying “Falun Dafa is good.” The practitioners taught the exercises and talked about Dafa’s principles of Truthfulness-Compassion-Tolerance and the persecution to several hundred students from all grade levels.

The principal wrote in an appreciation letter, “The service of the two Falun Dafa practitioners has greatly benefited the students.” 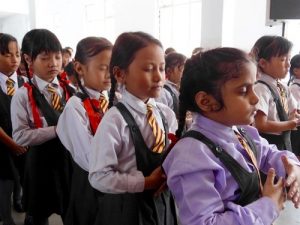 Children in an Indian state near the Myamar border learn about Falun Dafa.

In another school, it happened that the principal, a Catholic priest, had planned a teachers’ meeting for the upcoming Saturday. He gave the practitioners thirty minutes to introduce Falun Dafa and discuss how practitioners have been persecuted in China. The two practitioners were able to play the movie “China, 20th of July, 1999” to some fifty teachers present. The movie is in the form of a song—a touching appeal to people’s conscience combined with facts and footage about the persecution—and was composed and sung by practitioners from India.

During the meeting, the principal endorsed the practitioners by stressing that it is important for the students to study not just academic facts, but also to learn about what is happening in the world. The principal’s clear stand in front of the teachers resulted in their solid support during eight sessions. Many teachers also did the Dafa exercises during the two days of presentations.

Some 2,000 students from nursery to Class 12 subsequently learned about Truthfulness-Compassion-Tolerance, learned the Falun Dafa exercises, and became aware of the persecution in China. 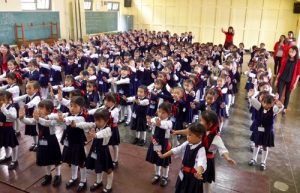 Nursery children have gathered to hear about and experience Falun Dafa.

During a break, one of the practitioners showed a short video of children in Ladakh singing “Falun Dafa Hao.” Ladakh is a state in North India, far away from the Northeast of India. Still, one of the local boys immediately said, “They are my friends.”

This principal wrote in his appreciation letter that the session with the staff members was “very informative and useful,” adding, “It was a wonderful experience for the students.”

At the third school visited by the practitioners–a Catholic girls school–the principal, a young Catholic nun from a nearby state, was very willing for all her students to learn about Truthfulness-Compassion-Tolerance, learn the exercises, and hear about the persecution. One of the practitioners was given the opportunity to talk in the morning assembly to all students and teachers, to introduce Falun Dafa.

In a small hall with up to 300 girls present, the practitioners presented several sessions about cultivating oneself and about the persecution. After the students did the exercises, they were asked how they felt. One girl said, “Amazing!” Another girl said, “Very peaceful.” Again, students from nursery up to Class 12 got to learn the exercises and attentively learned about the suffering of practitioners in China. 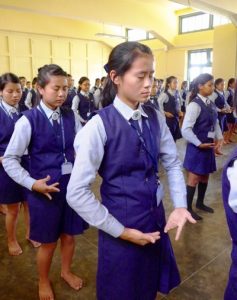 High school girls at a Catholic school in the northeast of India learn the Falun Dafa exercises.

To express her gratitude, the principal wrote in appreciation:

“I take the privilege to thank the members of Falun Dafa who, with much dedication, spent their time and energy for the benefit of our young children…the young students of our school, no doubt, have learned how to cultivate Truthfulness, Compassion, and Tolerance in their lives.”

“Today’s world is full of stress and strain. Violence and persecution are rampant. All these confuse and disturb the young minds and they really need help. At such a moment, the Falun Dafa came their way!!”

“I wish Falun Dafa all the very best in all its future endeavors. May it continue to flourish and make the world a better place to live!”

The principal gave each of the practitioners a set of two DVDs with dances and speeches from the school’s 50-year jubilee celebrations two years prior.

Many more people were very supportive of the practitioners and many times expressed their gratitude. The landlady of the guesthouse where they stayed accommodated them with various dishes made from local cereals and vegetables, saying as if speaking on behalf of her people, “We very much appreciate what you are doing.”

One government official was very touched by the practitioners’ traveling from far away and said, “Thank you for coming to this corner of the world.” Taxi drivers took flyers to give to future passengers. Stores took flyers and kept them ready for customers to pick up.

The practitioners left a good number of books and other materials in the State Library, the University Library, libraries of various schools and colleges, as well as in the jail of the capital.

The day before the two practitioners left the capital, on the occasion of a candlelight service held for two children who were killed a year earlier during a shooting incident, two children attending the event recognized one of the practitioners, smiled at her, and said, “It’s so good that you came to our school!”