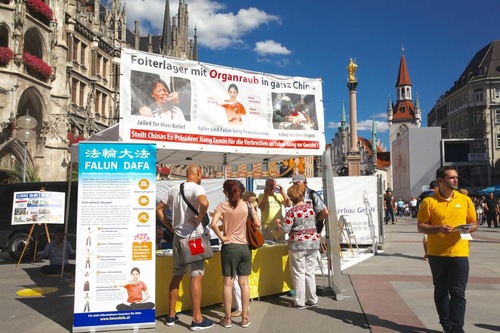 “They have endured too much. It is so painful. I must sign your petition to help end these organ harvesting atrocities,” said a woman visiting the Falun Gong booth setup on Munich’s Marienplatz on August 13. She had just learned how prisoners of conscience, most of whom practice Falun Gong, are custom-killed for their organs in China’s vast illicit organ trade.

Similar petition campaigns have been held in many cities this summer, not only in Germany, but around the world. Thousands are shocked to learn of such brutality and sign petitions in support of Falun Gong’s peaceful efforts to bring the persecution in China to an end. 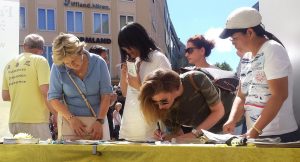 A physician offered to take a stack of organ-harvesting materials and distribute them to co-workers and colleagues. She said she had already signed the petition, but wanted to do more. She works at a hospital in Frankfurt that has an organ transplant department, and said that she and many of her co-workers had heard about the organ harvesting atrocities in China.

“Nobody in my hospital is willing to train the physicians from China. We are afraid that they would employ the techniques they learn from us to kill their fellow citizens for profit,” she said. 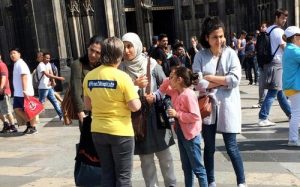 Concerned citizens learn about the persecution of Falun Gong in China.

A young couple didn’t hesitate to sign the petition at another booth setup in front of the Cologne Cathedral. They had seen a documentary about the forced organ harvesting and wanted to learn more about Falun Gong.

They, and many others, learned that Falun Gong is an ancient Chinese cultivation practice that teaches the principles of Truthfulness-Compassion-Forbearance. They were also introduced to the background behind the persecution in China, leading to the organ harvesting horrors of today. 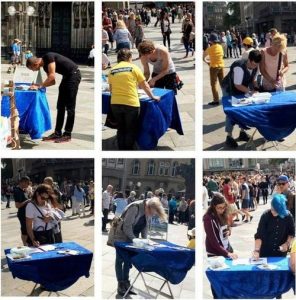 Collecting petition signatures in front of the Cologne Cathedral.

A young girl spent a long time reading the materials at the booth setup outside the Cologne Cathedral. She was truly shocked by the organ harvesting, and said how she believes that the world is at a turning-point.

“People try, but fail, to substitute spiritual rewards with material satisfaction. As a result, we have a society where many people hurt others for personal interest,” she sighed.

With great interest, she asked about the principles of Falun Gong and the importance of Truthfulness-Compassion-Forbearance.

As she left, she remarked that it was no coincidence that she had run into the Falun Gong group that day. “I didn’t want to go out today, but I felt some force urging me to drive for 60 some miles from Aachen to Cologne,” she said.