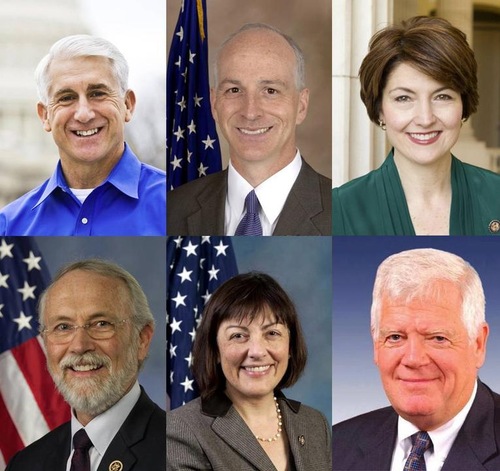 Six U.S. Congress Members from the State of Washington wrote to Chinese President Xi Jinping on June 20, calling for the release of imprisoned Falun Gong practitioners whose family members are residents of Washington State.

The bi-partisan letter was drafted by Congressman Dave Reichert (R), and co-signed by two Republican and three Democratic representatives.

The representatives are concerned about the situation of six Falun Gong practitioners, who are jailed because of their belief.

The letter highlighted the case of Chen Yinghua, who was arrested in 2014, and is serving a 4-year sentence. Ms. Chen was arrested for taking a picture of a friend holding a banner that read, “I want to see my father.”

The representatives believe that Ms. Chen has been mistreated during her imprisonment. Her 11-year-old son has had no contact with her or his father for over two years.

Chen Yinghua’s case was brought up by former Canadian Prime Minister Stephen Harper during his trip to China in 2014. The case was also mentioned in a Congressional Report in 2015 on the issue of religious freedom in China. 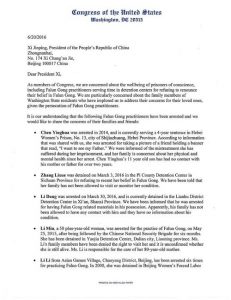 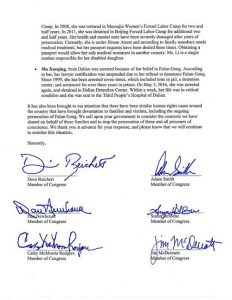 Letter to Xi Jinping from six Washington State representatives, calling for the release of constituents’ family members imprisoned in China

The representatives pointed out in their letter that “there have been similar human rights cases around the country that have brought devastation to families and victims, including the ongoing persecution of Falun Gong.”

The lawmakers called upon President Xi Jinping to “consider the concerns we have shared on behalf of these families and to stop the persecution of these and all prisoners of conscience.”