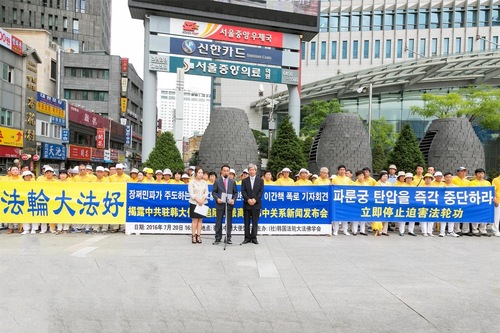 The South Korea Falun Dafa Association held a press conference on July 20, 2016 in front of the Chinese Embassy in Seoul condemning the embassy’s attempt to interfere with a recent rally held by their organization. They called for the expulsion of Chinese Ambassador Qiu Guohong, Political Counselor Chen Shaochun and secretary Guan Wenlong.

Falun Gong practitioners in South Korea held a rally on Seoul Plaza on July 17, 2016. It was learned that before the event, Chinese Ambassador Qiu directed Political Counselor Chen Shochun to request the South Korean Foreign Ministry to prevent the rally from taking place. The unreasonable request was declined.

The rally was to raise awareness of the Chinese Communist Party’s (CCP) persecution of Falun Gong and marked 17 years that the group has resisted the persecution in China.

At the press conference, Dr. Wu Shilie, spokesperson for the Falun Dafa Association of South Korea, condemned the CCP’s interference and demanded that Qiu be expelled from the country.

The Falun Dafa Association of South Korea pointed out that Chinese Ambassador Qiu interferes with South Korea internal affairs and infringes upon the civil rights of South Korean citizens. Spokesperson Wu said, “Qiu Guohong does not have the basic principles of a diplomat. He is guilty of damaging relations between China and South Korea.”

The Seoul Southern District Court of South Korea reversed its own earlier decision on May 4 to cancel the performance. The same court ruled on April 19 that KBS Hall must not cancel the contract. The reason for the reversion was because of the Chinese embassy’s two letters threatening that KBS would lose $8 billion in trade with China.

The CCP has been interfering with the Shen Yun performance in South Korea for a long time. The Falun Dafa Association of South Korea, which is the local presenter of the Shen Yun show, sought the expulsion of the Chinese diplomats involved.

The association stated that, “Shen Yun Performing Arts was established in 2006 with a mission to revive traditional Chinese culture. The company tours more than 100 cities around the world every year. The performance featuring classical Chinese dancing is commended as superb by experts. But to maintain its dictatorship, the CCP is afraid of the revival of traditional Chinese culture and attempts to interfere with the performance every year.”