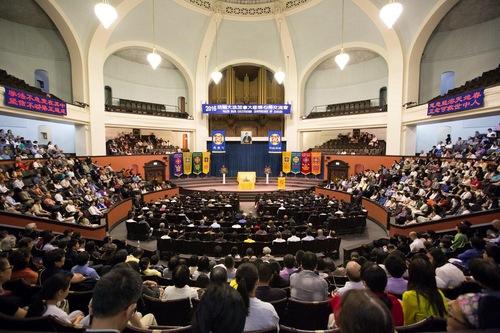 Nearly 1,000 practitioners attended the 2016 Canada Experience-Sharing Fa Conference on July 24, 2016, in Convocation Hall at the University of Toronto. Twenty four practitioners shared their experiences, and discussed their understandings of how to look within and do better as practitioners.

Ms. Yu Wenyan, a news media coordinator, said she used to look at others from the managerial perspective to evaluate how well they had performed. “One example is the discussions after weekly group Fa-study. Many practitioners often remain quiet; some practitioners did speak but they only talked about superficial issues instead of deep discussions. Noticing this situation, Ms. Yu often talked with individual practitioners and shared her concerns.

But this approach did not help much. Ms. Yu began to think further. Was she creating a positive environment for practitioners to share freely, and treating others with compassion, or just pointing out their problems? Was she expecting others to look within while failing to do so herself?

As she calmed down and improved herself, Ms. Yu saws many changes occurring. “More practitioners came to talk with me with their understandings, and I have much personal experience to share with them too. The barriers between us began to dissolve.” She realized that it was her own problems and perceptions that had blocked collaboration between practitioners. 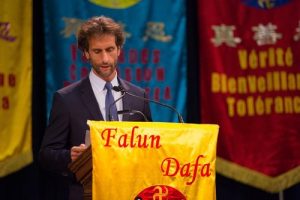 Practitioner sharing his experiences at the conference.

Kevin Yang, who has practiced for 18 years, is a program host at NTD television. He said as the program became more and more popular, his human notions surfaced, “I paid lots of attention to feedback from the audience and other practitioners.” As a result, his attachment to zealotry, showing-off, fame, and interest gradually increased.

In addition, given his position in the television station, Mr. Yang had developed a strong ego, and hardly accepted opinions from others. As time continued, these practitioners got used to it and no one complained.

Upon thinking this over, Mr. Yang began to look inward to improve himself. His heart became pure, as if he had just started to practice. 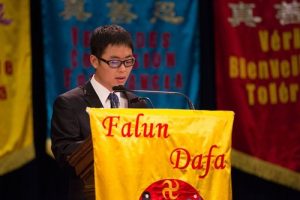 Practitioner sharing his experiences at the conference.

Ms. Yu Changhui has been helping with the ticket sales hotline for Shen Yun performances since 2013. This gave her many opportunities to improve xinxing.

One day in 2014, a practitioner called her from a retail site, checking for tickets available for Mississauga. As she was looking up the tickets, the practitioner on the phone said, “Quick! Quicker! Is there anyone else who could help me with this faster?”

Ms. Yu Changhui became upset because she was already doing her best. In addition, she was thinking, “How could a practitioner be so impatient?”

As she thought it over, however, she realized that the practitioner was a in a hurry selling tickets at a retail site. Therefore, instead of complaining about the other practitioner, it was she who should try to do better.

Once Ms. Yu Changhui’s mind became pure, the other practitioner’s attitude also changed dramatically, and they have since worked well together. 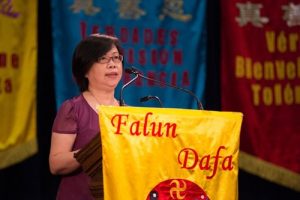 Practitioner sharing her experiences at the conference.

As Dafa disciples, we know that people’s minds can be influenced by vicious elements, making them difficult to save, he said, “In fact, as practitioners, our negative thoughts and negative actions could come from influence of vicious elements, too.”

Therefore, he said any negative thought toward ourselves and others is a weapon that attempts to attack practitioners one by one, aiming to destroy us as a whole.

Thinking of this, he began to focus on basic things such as studying the Fa, sending forth righteous thoughts, and telling others about Falun Dafa. When negative notions came to his mind, he would follow Master’s words to oppose them, “These negative thoughts are not part of me.”

As Chipkar continued to do so, he found he was able to make steady progress in cultivation practice.

Mr. Zhou Meiman, 29, a practitioner from Montreal, began practicing Falun Dafa 20 years ago, when he was 9. One coordinator asked him to find some practitioners to work on a phone team that would call China to debunk the defamatory propaganda against Falun Dafa. He said, “I introduced this project during a group discussion, and about six or seven practitioners said they were interested in it.”

But when he set up follow-up meetings to discuss the details, very few attended. “This made me think that the way I talked about the project was attractive to some practitioners momentarily. But it didn’t last long.” He realized that it was his xinxing, not just the words, that can really change a person. In other words, he need to act based on the Fa.

Mr. Zhou has since stopped being pushy or demanding of other practitioners. He full-heartedly helps those who would like to join, without pursuing the end results.