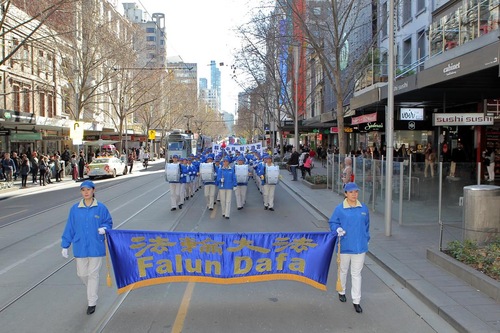 Falun Gong practitioners in Melbourne and Brisbane, the second and third largest cities in Australia, recently held various public events to raise awareness of the 17-year-long persecution of Falun Gong in China.

A march and rally took place in Melbourne, capitol of the state of Victoria, on July 16. Government officials and human rights advocates spoke at the event, including Peter Westmore, president of The National Civic Council (NCC), and Bernie Finn, member of the Victorian Legislative Council.

A separate rally was organized in Brisbane, the capital of Queensland, on the same day. 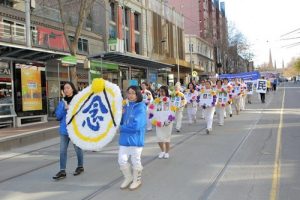 Pictures of Falun Gong practitioners who lost their lives in the persecution.

A March in Melbourne

Led by the Divine Land Marching Band, the march held in Melbourne went through the business district and Chinatown, and ended at the City Square.

Archie, a Malaysian descendant, and his friend Dylan said the march made him curious to know the real story behind the persecution of Falun Gong, “One of my Chinese friends has told me something negative about Falun Gong. Now I know he must have been influenced by the communist party.”

Kelly Banfield, a student at La Trobe University, was shocked to learn of the severe human rights violations. “I cannot imagine that such an atrocity [forced organ harvesting] could happen in the world today,” she said. She and her friend said they would share what they learned with more people through social media. 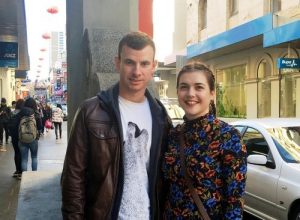 College student Kelly Banfield and her friend said they would tell more people about the suppression in China.

“Every year we gather hear to raise awareness of the persecution in China–hoping more people in positions of power can make a right choice between short term financial and economic gains and moral conscience,” said Fan Huiqiang, Director of the Victoria Falun Dafa Association, at the rally.

He called on the Australian government to pass laws to ban organ transplant tourism in China. “This is because those people might not realize someone is being killed to order to provide them with an organ,” he said.

Bernie Finn MP said that innocent people should not be harmed, let alone killed, for doing a peaceful meditation.

He said he would continue supporting Falun Gong practitioners to have the freedom to practice their belief in China. 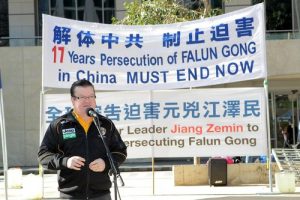 Bernie Finn MP said Falun Gong practitioners do not have freedom of belief in China.

Vivienne Nguyen, a Vietnamese community leader, praised Falun Gong’s perseverance. “Your hard work has set a good example for us. Our society, including the Vietnamese will keep supporting you,” she said tearfully.

Peter Westmore, president of The National Civic Council (NCC), said this issue is not only related to China, but also needs broader attention because it is a large-scale genocide. 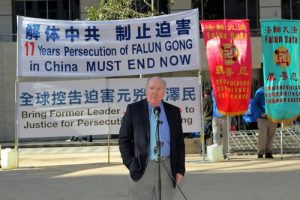 “China’s organ harvesting industry is like the massive atrocities the world has seen of Cambodia, of Rwanda, of the Darfur genocide and the Jewish Holocaust,” said Gerard Flood, Federal Treasurer of the Democratic Labor Party. He urged the Australian government and medical industry to take action, and to include financial, business, and other approaches until the atrocity stops in China.

“Other countries have demonstrated that the way to benefit from trade with China is to firmly oppose Chinese criminality, not remain silent about the regime’s enormity of its crimes against humanity,” said Mr. Flood. 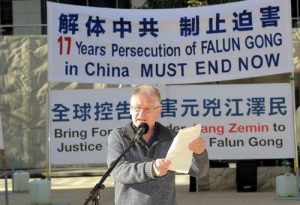 Gerard Flood from the Democratic Labor Party said the suppression against Falun Gong practitioners in unprecedented. 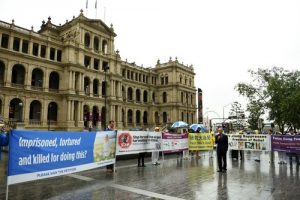 John Andress, spokesperson of Queensland Falun Dafa Association, said investigations now estimate over a million victims of forced organ harvesting and “most of them are Falun Gong practitioners.”

Sandra from New Zealand said she had heard about Falun Gong several years ago. “I did not know the suppression still continues in China,” she said. “After all, we are all human beings and we should respect each other. This persecution must stop.” 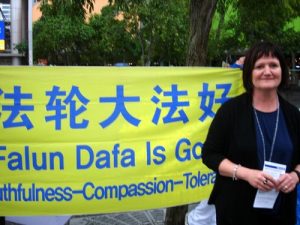 Scott Smythe, a business owner in the Gold Coast, has practiced Falun Gong for 17 years. “Here we enjoy the benefit of physical health and improvement of one’s character; while in China, people are being killed for practicing the same meditation.”

He said Falun Gong practitioners are sharing the information not only for themselves, but, “What is happening in China is related to the foundation of mankind and it involves every one of us.” 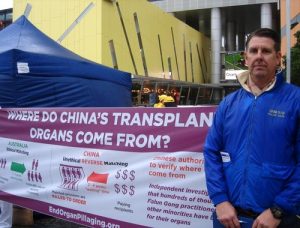 Scott Smythe learned Falun Gong about the same time the persecution began in China 17 years ago.