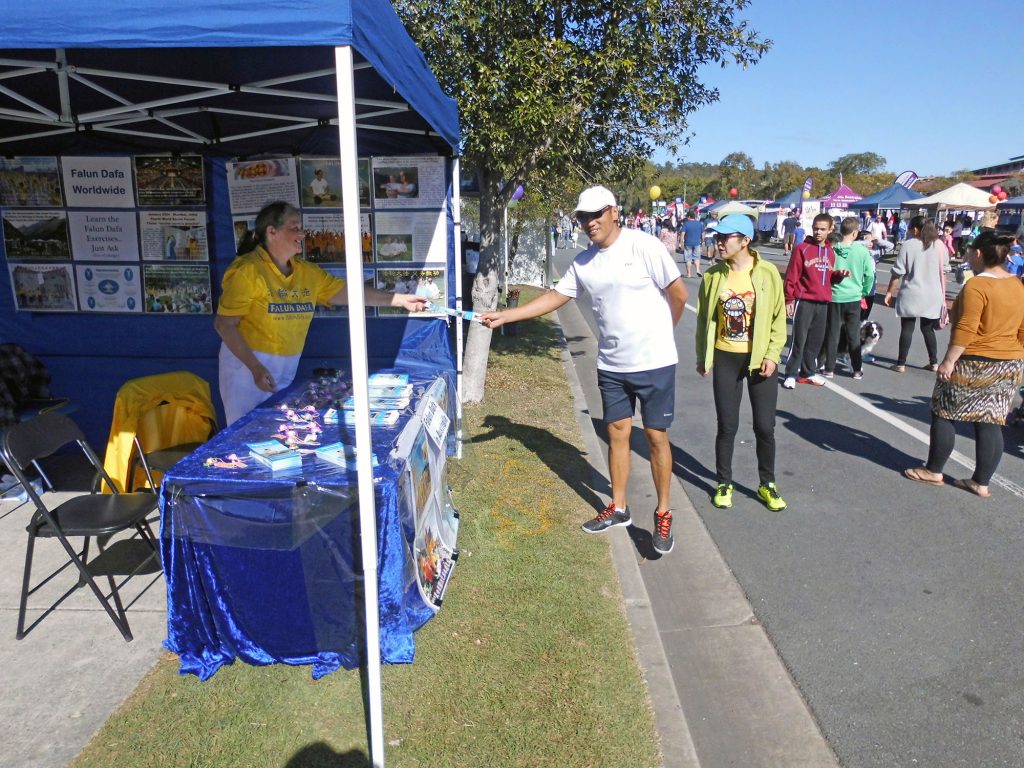 On 10 July 2016, locals gave a big welcome to Falun Dafa at the Pacific Pines Winterfest on the Gold Coast in Queensland, Australia.

The festival is a major community event in the Gold Coast hinterland, attracting up to thousands of locals from both near and afar. Falun Dafa has attended for the past four years and many people have learn’t to appreciate the significant health benefits of practicing the five sets of exercises and studying the main book, Zhuan Falun (which in Chinese means Turning the Dharma Wheel). 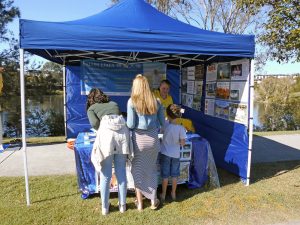 Victoria from the local Kiwanis Club visited the Dafa stall and collected some information about the practice. After hearing the benefits of the practice, she took a photo of the stall and promised to spread the good news about Dafa through her social networks.

An American-born local called James had heard about Dafa before, and wanted to know more about the exercises including why disciples are being arbitrarily detained, tortured, organ harvested and killed in custody by the Chinese Communist Party (CCP) in Mainland China.

After seeing the Peaceful Journey of Falun Dafa photo exhibition, he said: “Really, is the CCP’s only reason to persecute you is because you want to exercise in the park?! This is terrible.” He was impressed to hear more people still want to practice Dafa in Mainland China despite the persecution, and still enjoy Dafa’s many health benefits. He even expressed interest in learning the exercises at the local practice site after hearing a Dafa disciple healed his knee, which was injured while doing martial arts, simply by sitting in meditation for short periods of time over many months. 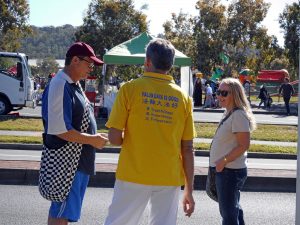 A couple from Mainland China gladly accepted information about Dafa with a big smile on their face, while an Australian couple took the brochure and said how happy they were to see Dafa disciples continuing to practice despite the persecution happening in China. Others were shocked and concerned to hear about the CCP’s heinous crimes committed throughout its 17-year-long persecution against Dafa, and festival goers admired the perseverance of disciples to continue practicing during such tragedies.

When two disciples lined-up at the ice cream truck, they were surprised to learn the person before them had already paid for their ice cream cones. The disciples decided to donate the money they would have spent on the ice cream to charity instead. 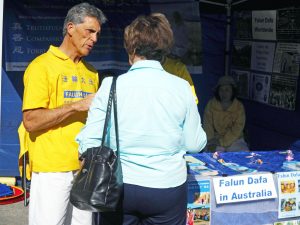 Lindsay from the United Kingdom was visiting relatives in Australia and happened to stop by the Dafa stall. He was fascinated to hear about the Dafa exercises since he has generally been an active person himself for the past 30 years.

He was very interested in seeing the historical photos of 10,000 people joining a practice site in China before the persecution began in 1999, and even brought his entire family back to the Dafa stall to see the photos, take the information and collect some origami lotus flowers.

His two daughters were also interested in learning the Dafa exercises, especially after hearing disciples explain the benefits of the practice. Lindsay also brought his family to watch disciples demonstrate the five sets of exercises on stage.

Each disciple performed the movements of a different exercise sets, while the sixth person spoke about the benefits of practicing Dafa and where the local practice site is held. After the demo the official emcee said he felt “very relaxed”, and almost entered into a state of trance after watching disciples perform the gentle and gradual movements on stage. 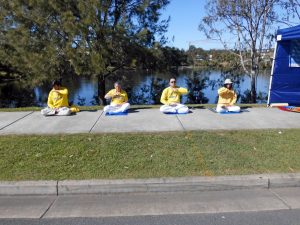 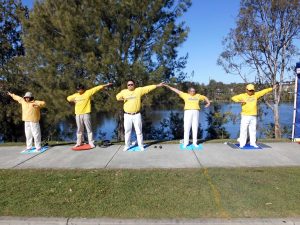 A council worker called Nicole visited the Dafa stall and was very happy to receive information and origami lotus flowers, which in Asian culture symbolise peace and purity – something Dafa disciples aspire to achieving regardless of how harsh or chaotic the environment around them may be.

Disciples told Nicole the lotus flower is also a symbol of the Petals of Peace initiative, which raises awareness of children in Mainland China whose parents were persecuted to death – just like Australian citizen Fadu Dai. She was very moved by this and felt she was predestined to come to the stall. 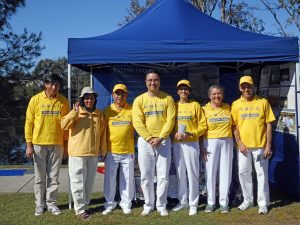 Tia, who was born in Indonesia, was very interested to hear Dafa disciples sometimes do Chinese lion and dragon dancing at big festivals. She thought disciples should perform more often because it is very popular with the crowd.

One of the organisers invited Dafa disciples to give an update to their community group at a later date on what is happening in China, and perhaps even teach them the five sets of exercises. Dafa disciples thanked them for the gracious invitation.